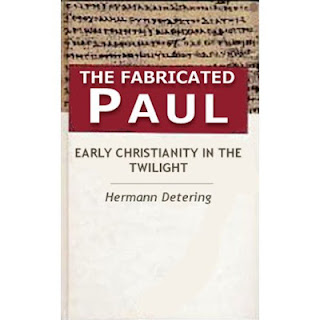 The sturdy and unyielding consensus among New Testament scholars is that Paul wrote just seven of the letters traditionally attributed to him.  In fact it's something of a surprise find anyone credible, as Jerome Murphy O'Connor is, who is willing to advocate for more than the seven.

On the other hand, for years I've been hearing that, out on the far fringes of the field, there are those who dismiss even those last seven, regarding their rock solid status as rubble.  Among those lonely and unrepresentative figures the name Hermann Detering stands out in particular, a Berlin pastor whose few published works are largely accessible only in German.  Not that Detering has convinced many; even radical scholar Gerd Ludemann finds the idea that the Pauline corpus is a second century concoction "mistaken and refuted by the existing sources."

The man now speaks for himself in The Fabricated Paul: Early Christianity in the Twilight (Der gefälschte Paulus - das Urchristentum im Zwielicht), just recently made available in English for the first time, and available for Kindle for under $4.

German scholarship has a deservedly poor reputation for readability, but, whether due to Detering's passion or Darrell Doughty's powers of translation, this is a refreshing exception to the rule.  I'm currently working my way through the book, highlighting as I go, and hope to offer a few thoughts and quotes along the way.

But for a modest layout of $3.70, why bother with second hand impressions?
Posted by Gavin R at 09:01