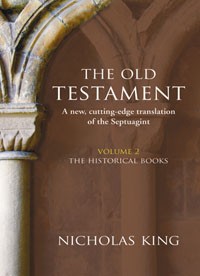 I'm excited.  Yep, I know it's a bit sad, but I do get excited by strange things that barely raise an eyebrow among the brethren (and brethrettes).

We're talking about the release of volume 2 in Nicholas King's translation of the Septuagint.

To recap, for those not yet up to speed, King is a British Jesuit scholar, a kind of latter-day Ronald Knox.  Some time ago, after completing his own New Testament translation he launched out on the Hebrew Bible.

Well, not the Hebrew Bible actually, but the Septuagint (LXX).  It was, after all, the LXX which was the first Christian scripture, long before uppity types like Jerome and Luther led us back into the badlands where we snatched, appropriated, stole the Hebrew Bible (as opposed to the Greek translation) from its rightful owners, then proceeded to beat them about the head with it.

A thousand travesties have flowed from that, not least in recent times that Great Whore of Wheaton, Illinois, the English Standard Version.

Already published were volume 1 (The Pentateuch) and volume 3 (The Wisdom Literature).  Now, hot off the press at Kevin Mayhew in Suffolk, comes volume 2, The Historical Books - "Joshua, Judges, 1 and 2 Samuel, 1 and 2 Kings, 1 and 2 Chronicles, Ezra and Nehemiah, plus the added bonus of the Septuagint’s little-known books of Tobit, Judith, Esther, 1 and 2 Maccabees."

Who wouldn't be excited? (Please note, rhetorical question.)  King's LXX strikes quite a different tone to the dry academic NET LXX, and the stodgy version that appears in the Orthodox Study Bible.

Alas, Kevin Mayhew is one of those publishers who largely evade the radar at Amazon and the Book Depository.  Unless you live in the UK you'll need to order direct, or find a really good bookshop that'll bring it over for you.  But, what the heck, you only live once.