The Journal interviews Bob the Prophet 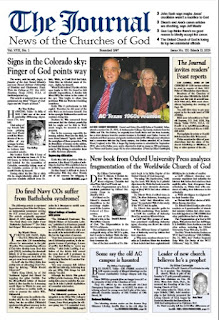 The latest issue of The Journal: News of the Churches of God has been released, dated March 13. Included in this issue is an interview with Bob Thiel, a brief review of David Barrett's Fragmentation of a Sect, an announcement of the death of Dennis Luker, and a variety of festival reports from last year's Feast of Tabernacles.

If there were any doubts that self-designated prophet Bob Thiel had "jumped the shark" while jumping ship from the Living Church of God, they were swept away on reading a substantial interview with Journal editor Dixon Cartwright. Thiel poses little danger to competing sects, and at times he comes across as delusional and out of touch with reality. Thiel apparently now describes his profession as a "clinical scientist," which is a nice way of avoiding using the term "naturopath."

Dennis Luker, president of the United Church of God, has died only days after stepping down after diagnosis with an aggressive form of cancer. Robin Webber is now acting church president.

A small item on the back page confirms that COG-PKG cult leader Ronald ("the sky is falling, the sky is falling!") Weinland is now serving a three and a half year sentence for tax evasion. Weinland is still touting May 19 this year as his latest touchdown date for the return of Christ. The advertising section maintains the usual standard of mind numbing theological inanity, but I guess they pay the bills.

You can, if you're feeling like sampling the alternate universe of COGdom, download the complete issue for free.
Posted by Gavin R at 22:52