The Melbourne Age on Jehovah's Witnesses 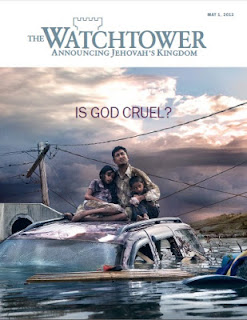 Is God Cruel? is the question on the cover of the latest edition of The Watchtower. The expected answer is no, but many Australians are asking whether the question is better directed at the Jehovah's Witnesses themselves, and there's some compelling evidence that there is a real problem.

Australia's federal government is currently making noises about removing tax exempt status from controversial religious groups, and the fingers are pointing at the inveterate door-knockers.

The Melbourne Age is running two stories sure to turn up the heat on the Kingdom Halls and the culture of the movement.

In one, in Friday's edition, senior writer Chris Johnston airs concerns from local "cultbuster" Raphael Aron. Whether or not Mr Aron can be relied on for professional distance from his subject is open to some question, but the JW policy of shunning, and allegations of sexual abuse against children, certainly raise legitimate questions.

In the Saturday edition Johnston takes a deeper look, focusing on the stories of ex-members like Bec Taylor. Together the articles do much to shatter the image of Jehovah's Witnesses as a bizarre but reasonably benign variation on a Christian theme. Former members of other minority Christian sects may find disturbing parallels with their own experiences.

Are movements like Jehovah's Witnesses, the Exclusive Brethren, the "Worldwide family" (to use David Barrett's term for the Armstrong sects), or even high-powered charismatic groups like Hillsong, inherently abusive to a greater extent than mainline churches, which tend to be less at odds with the wider society?

It seems that some of the unwanted visitors who knock at our doors clutching copies of Watchtower may be themselves struggling in a web of authoritarian abuse and suppressed doubt. Those of us who have walked a mile in similar moccasins might want to bear that in mind next time they come calling.
Posted by Gavin R at 10:30