Our Roots of Prediction Addiction 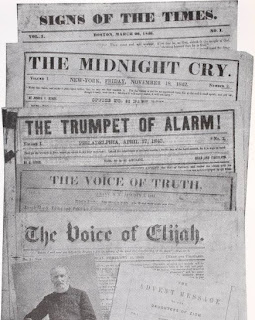 Some of us have learnt over the years to view "Bible Prophecy" with a jaundiced eye. The attempt to turn the complex texts of the Old and New Testaments into a coherent road map for the near future is doomed to failure from the outset. Ancient writings simply can't be read that way with any integrity. It's not just bad theology and rotten exegesis, it's a display of dull and incompetent basic reading skills.

Where did we pick up the bad habit? When did the peculiar blend of Bible-quoting, fear-saturated fantasies we are familiar with first take recognizable shape? Doomsdayers have of course been with us from the earliest days of Christianity - with deep roots in Jewish apocalyptic. If we are honest about it, we can probably trace the trail even further back to the influence of dualistic religions like Zoroastrianism.

But the version we're most familiar with owes a great deal to the Adventist "Midnight Cry." Stepping back into the nineteenth century we find the seeds of our particular prediction addiction. The various churches that have historic ties to William Miller (and, on the other side of the Atlantic, the equally disturbed John Nelson Darby) are still largely in thrall to bizarre and naive biblical misinterpretations, and the delusion that they have some kind of special "inside knowledge" about the future.

This was brought forcibly home recently when I stumbled across a copy of the magazine Adventist World.


Although we see many natural and human atrocities, life continues to move on, giving the illusion that "all things continue as they were from the beginning" (2 Peter 3:4).

But we Seventh-day Adventists know better. Prophecy opens our eyes and tells us the truth, with the books of Daniel and Revelation pulling back the curtain, revealing what has happened in the past and what is soon to happen in the future. "The secret things belong to the Lord our God, but those things which are revealed belong to us and to our children forever" (Deut. 29:29).

We have to know who we are, and where we are in the spectrum of end-time events... I encourage you, if you haven't already done so, to return to biblical prophetic belief and understanding. The freedoms we now enjoy will not last indefinitely: the devil and those who do his bidding will see to that.

Is there a single sentence here that isn't flawed and, to put no too fine a point on it, a display of wanton biblical and theological ignorance? Amazingly, the writer isn't a backwater SDA missionary expressing a personal view, but the president of the Seventh-day Adventist denomination, Ted Wilson.

There's a lot worthy of respect in the SDA tradition. Adventists have been pioneers, for example, in the field of health awareness and, unlike some kindred groups, have a lively sense of social responsibility and community engagement. But can any denomination, no matter how well intentioned, holding uncompromising stands on six-day creationism and Chicken Little eschatology, really be taken seriously in the twenty-first century?

All of which, if nothing else, puts the prattle of Church of God prognosticators, fellow travellers in the same tradition, in perspective. They may be nuts, but they're far from alone.