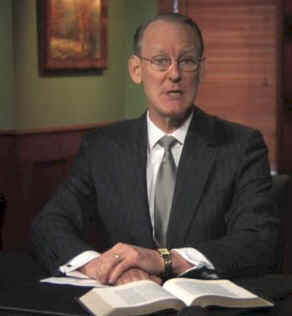 New Zealanders are apparently about to be subjected to the inane rantings of one of America's most hard line Church of God sects. David Pack has thrown money at two major Kiwi broadcasters to gain local television exposure. Gary Leonard quotes the following from a Pack missive.

More millions in Australia and New Zealand will be reached through satellite coverage via The Word Network! Also, both TV ONE and Prime TV networks in New Zealand will launch on Sunday, April 7 to a combined 3.1 million households—effectively blanketing that nation three times. These new stations will be available via Freeview, Sky satellite and cable providers across the country.

I shudder to think that this high demand cult leader (in both the sociological and popular senses of that word) will now be free to vomit his apocalyptic fear-based filth into this corner of the Pacific, preying on the gullible, poorly educated and vulnerable. It was bad enough with Meredith, but Pack? God help us!

It is of some small consolation that Pack will have minimal impact in a country that is increasingly post-Christian, but of course there will be a few sincere but clueless people who are lured by his text-twisting fantasies to part with both their tithes and their personal autonomy. It seems TV One, which is a public broadcaster, will now do almost anything to garner a few more dollars. Who's next on their list? The Church of Scientology?

If you're a New Zealander, maybe you'd like to contact TV One and/or Prime, or consider making a complaint to the Broadcasting Standards Authority once the Pack series, titled The World to Come, begins airing. Australia be warned, you're next.

Postscript: The US-based Word Network is a very, very minor player locally, only available on the Optus D2 satellite, so it's highly doubtful "millions" of Kiwis will be viewing that way. 'Thousands' would still be stretching it. And what is "the largest African American religious network in the world"  doing broadcasting British-Israelism anyway?  Do they know just how race-based BI theology is? They already broadcast Meredith's Tomorrow's World, however, so no surprise really. With a name like theirs you'd imagine it would be a Christian enterprise with a few basic quality control criteria, but apparently they're not at all particular about snatching thirty pieces of silver, no questions asked, from whoever is willing to hire their services.

I think there's a word for that...