Two Men on the Mount of Olives 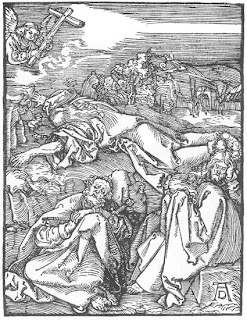 (An earlier version of this post appeared back in 2010.)

Matthew tells the story of the night Jesus was arrested at Gethsemane on the Mount of Olives (Mt. 26: 36-46). The Master talks to his companions about the coming betrayal before inviting his closest disciples to share the moment with him. They, of course, famously fall asleep instead. Jesus prays fervently alone, pleading with the Father. Finally, resolved to go through with whatever must come to pass, he rises only to be confronted with arrest.

Here we find a despairing, weeping David on the Mount of Olives, fleeing for his life from Absalom (2 Sam. 15: 30). Here David prayed, according to tradition, the words of Psalm 3:2-3. It appears that Matthew was very familiar with both the psalm and 2 Samuel when he composed the arrest account. Skip ahead to 2 Sam. 15:26 which expresses David's acceptance of whatever might follow: "let him do to me what seems good to him."

The parallels are fascinating, and it would be difficult to deny that, while there are also obvious differences, one does not foreshadow the other. An ancient tradition is retreaded for a new audience

I'm indebted for these insights to Thomas L. Thompson's The Bible in History (1999):


On the night before [Jesus] dies, he fills David's role as pietism's everyman on the Mount of Olives... Like David, Jesus is abandoned by his followers. He suffers despair, and is without hope. He goes to his mountain to pray, paraphrasing David's words in the voice of tradition: 'not my will but yours be done.' ... This is reiterated history...

What this actually means for the contemporary reader is left up in the air. If the Gethsemane account is in fact "historical fiction", does it matter? What about the Christmas narratives? The miracle stories? The Resurrection account? How far down does this onion peel?

There are wonderful progressively minded believers who are more than happy to find the "facts" irrelevant, and thus liberated cut their faith free from such historical embarrassment. A decaffeinated - dehistoricized - faith that looks like the original product but lacks the pungency and kick.

But, to follow the analogy, real coffee drinkers might well ask, what's the point?
Posted by Gavin R at 10:43