Things have been a bit quiet around here over the last couple of weeks. The drought is about to break with a triptych of posts inspired by the latest issue of The Journal. But before that, I want to chuck one out there for my fellow Kiwi readers - this time with a (rare) political slant.

Like a lot of other folk in Godzone/Aotearoa (let the reader understandeth) I've been eagerly awaiting my copy of Dirty Politics by Nicky Hager. Unless you've been hiding under a rock for the past week (or live somewhere other than New Zealand) you'll know what I'm talking about.

Given my own past background in a Sabbath-keeping church, perhaps it's not surprising that I took a double-take when I got up to page 26 of the Hager book this afternoon. It turns out that foul-mouthed blogger Cameron Slater, a major subject of the Dirty Politics exposé, is a Seventh-day Adventist.

You know, Seventh-day Adventist, the nice folk who go to church on Saturdays, take the Bible literally, believe the universe is only 6000 odd years old, advocate vegetarianism and abstain from smoking and alcohol. 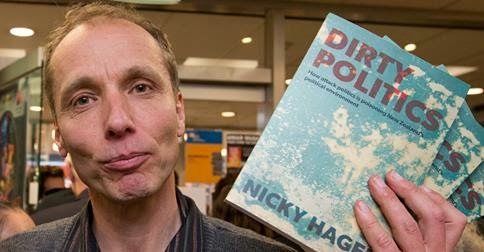 I've known a few SDAs over the years and yup, they're invariably conservative politically. Good on them. They're also been people of integrity, polite, restrained and principled. Those are not qualities that describe Slater whose "Black Ops" rhetoric defies anything remotely 'Christian'.

Thinking Hager perhaps had it wrong, I hit Google and came up with this quote from a 2010 interview with Herald writer Michele Hewitson.


He is a Christian who goes to meetings at a Seventh Day Adventist church. If you accuse him of not behaving in keeping with the tenets of Christianity, you have the wrong idea of what Christians are supposed to be like. Which is "that there's a whole lot of nice people running around and hugging each other".

He's not a sissy sort of Christian then. He gave me a lesson on the disciple Paul who was a "zealot, an enforcer". He said: "I'm not comparing myself with Paul, just in case you're thinking about writing that."

Anyone who uses language like c*** and f*** as often as Slater does, who deliberately sets out to destroy those whose political views differ from his own, who vilifies them as 'scum' ... this is a Christian?

I warmly recommend Hager's book. Don't believe for a minute the spin John Key is trying to put on it. Cuddling up to someone like Slater was a dumb move from the start.

The Teflon Prime Minister may just have lost his non-stick coating. At the very least it's badly scratched.