Who killed the Worldwide Church of God? Part 1 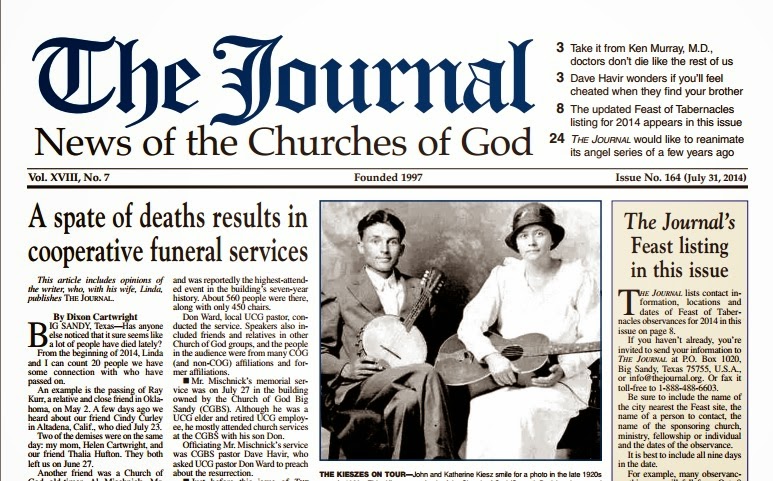 I've been commenting on the bizarre, faction-ridden world of 'Armstrongism' for more years than I care to remember. The reality, through all the pain and division, posturing pastoral prima donnas and autocratic imitators, has been that the movement has been in relentless demographic decline; despite the ongoing soap operas, ministerial drama queens and slick, expensive media promotions. For those of us once invested in the Churches of God the passing decades have provided a combination of entertaining farce and chronic unease. Either way, it's been hard to ignore.

But it's impossible to deny the inevitable. Armstrongism - that particular strand of Sabbatarian Christianity that looks back to Herbert Armstrong as its founder - is now little more than a minor footnote on the pages of American church history.

The front page of the latest Journal illustrates the decline. In the face of dwindling numbers, competing sects are now cooperating. The Journal even uses the term 'ecumenical' (!) to describe recent funeral services which included "speakers and moderators" from more than one COG group. It's a sure sign that the rapidly greying constituency is looking backwards, not forwards.

Meanwhile in Chicago two COG congregations are in the process of merging. Merging! Imagine that. This is, after all, a movement that famously multiplies by dividing. The fires are burning ever lower.

It is often a quiet desperation that brings feuding family members together. The Armstrong sects are fading into complete irrelevance. The game is up, and misery must seek company and comfort where it can.

What a contrast to the high profile years of the past when almost everybody in the US was exposed in some way to the Worldwide Church of God - then a rigorously monolithic single-brand - through its cutting-edge media in radio, television and print.

Of course there are still buffoons loudly prating about their own sole legitimacy. But does anyone take them seriously as they stumble from one back-down to another? These are not vibrant faith communities but side-shows in a small-town circus. How many will still be around in ten years time?

So who if anyone is to blame? Who killed the Worldwide Church of God? Tkach Senior? Tkach Junior? Rader? Garner Ted?

Some further thoughts next time...
Posted by Gavin R at 23:22