Who Killed the Worldwide Church of God? Part 2 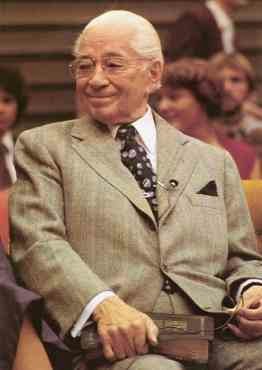 Herbert Armstrong was a remarkable man. It takes a remarkable individual to found a successful new religious movement. In that same sense Ellen White was remarkable, as were Joseph Smith, Mary Baker Eddy and Judge Rutherford.

While he lived Armstrong ran a tight ship. He was a paranoid leader exercising sole authority. His own unyielding doctrines were enforced. But when it became inconvenient for the great man himself, however, such doctrines could be speedily flushed. Medical intervention, coffee on the Day of Atonement, D&R, interracial marriage, makeup (oh the lure of Ramona's painted toenails!)

At the end of the day it was all about Herb. He was the measure of all things. Anyone who got in the way, including family members, was expendable.

After building his empire - an empire that seemed rock solid for decades - Herb Armstrong failed to ensure its survival. He totally failed to see - perhaps refused to see - beyond his own lifetime. He built on sand. As David Barrett has clearly documented in The Fragmentation of a Sect, there was no clear line of succession.

How could there be? He was the sole apostle, the End Time apostle. As Louis XV was reputed to say; "Après moi, le déluge" (after me, the deluge).

And a deluge there was, though on a more limited scale than the anticipated Great Tribulation. This deluge merely washed away all the hard-won baubles of Herb's apostleship.

Armstrong dismally failed to ensure any enduring heritage. He surrounded himself with Yes-men. Anyone with the talent to take the movement on beyond his death was purged. They were seen as threats.

The failed prophecies of 1972 and the rebellion of '74 had shaken the organisation, but did little permanent damage. The debacle of Ted's ouster in 1978, followed by the receivership crisis - the church emerged more or less intact. In fact it then continued to grow in spite of scandals, defections and the brilliant journalistic endeavours of John Trechak. But it couldn't survive Herb's passing.

At this distance out most of us are probably grateful the Worldwide Church of God disintegrated. But the cost to many was huge, the collateral damage intolerable.

The Internet age may well have speeded up the process, but the rot was evident even before Bill Ferguson, Mark Tabladillo, The Painful Truth, the so-called Exit & Support Network (and shortly thereafter Ambassador Watch) came on the scene. The die was already cast.

Who killed the Worldwide Church of God? In my view, not Ted, not Stan, not Spanky. Not even Tkach, junior or senior. And brethren, it wasn't 'Satan' either!