What's the connection between Republican presidential hopeful Ben Carson and late evangelist Herman Hoeh of the Worldwide Church of God?

From an article by David Krueger on Religion Dispatches. 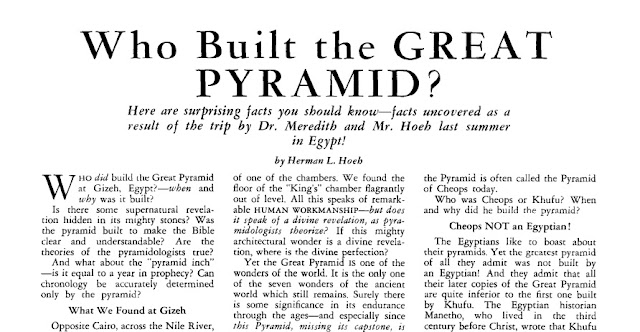 The writings of one Joseph-built-the-pyramids enthusiast reveals some clues about what might be at stake in Carson’s firm embrace of his beliefs.

In 1964, the evangelist Dr. Herman Hoeh wrote an article titled “Who Built the Great Pyramid” in a Worldwide Church of God magazine called The Plain Truth. Hoeh begins his article emphasizing the impressive size of the pyramid and the mathematical precision with which it was constructed. He notes that the Great Pyramid is one of the seven wonders of the ancient world and that a pyramid, minus a capstone, is imprinted on U.S. currency. Additionally, he claims that the citizens of the U.S. are the descendants of Joseph’s son Manasseh. Very quickly, we get a glimpse of Hoeh’s interests in writing about the pyramid:

"We found the external appearance of the Great Pyramid ruined by the Arabs. For centuries they have carted away and used the polished white casing stones which once made the Pyramid gleam in the sun and moonlight."

He also cites another example of Arab mismanagement of the pyramid stating that after the “Moslem Arabs” invaded Egypt, they further vandalized the “architectural wonder” when they “blindly cut into the pyramid hoping to find buried treasure in it.”

Hoeh goes on challenge the scholarly consensus about the identity of the known builder of the pyramid, the Egyptian pharaoh Khufu (or as he’s known in the Greek, Cheops). First, Hoeh exploits some of the uncertainty about Khufu’s family line by asserting that he was not Egyptian, but instead came from a foreign sheep-herding people who were of a “different race.”

Hoeh then asserts that Cheops was not an “idolater” like other Egyptian pharaohs. To the contrary, he says, Cheops worshipped God under the name “Amen,” which he notes is later used to refer to Jesus Christ in the Book of Revelation 3:14. Furthermore, although scholars have dated the rule of Cheops to the 26th century B.C.E., Hoeh claims that he built the Great Pyramid almost one thousand years later during the time of the seven-year famine, spoken of in the Book of Genesis, when Joseph took up residency in Egypt and assisted the pharaoh in leading during a time of crisis. And what is the true identity of Cheops? In Hoeh’s mind, it is none other than Job, another character from the Hebrew Bible.

Hoeh’s historical claims are clearly flawed and easily debunked, but he succeeds in crafting a narrative that inserts revered figures of the Biblical tradition into the starring roles of Egypt’s history. Hoeh’s assertion that Egypt’s most revered structure was built by the Israelites Job and Joseph is followed by a territorial claim. The Great Pyramid, says Hoeh, was constructed by the Biblical Job with the help of Joseph “to commemorate what Joseph did for Egypt and to mark the border of the territory given to Joseph’s family in the land of Egypt by Pharaoh.” The land granted to the patriarchs of Israel “extends westward from Palestine to the Nile River” and includes the Suez Canal even though “Egypt has [wrongly] seized control of it.”

Hoeh concludes with his hope that one day the Great Pyramid will be recognized by modern Egyptians as a monument to the true God, Amen, a.k.a. Jesus Christ, the capstone depicted on U.S. currency. Given his earlier association of Joseph as a forefather of Americans, it’s not hard to imagine that Hoeh hopes for a Middle East more greatly influenced by Christianity and U.S. foreign policy. (End of excerpt. The 1964 Hoeh article is still available online.)


Few 21st century adherents of Armstrongism are aware that Herbert Armstrong once toyed with "pyramidology" - the idea that the Great Pyramid was "prophecy written in stone" complete with measurements in "pyramid inches" - after reading British Israel texts such as Great Pyramid Proof of God (George Riffert, Destiny Publishers, 1932). After actually visiting the pyramids himself on a tithe-funded junket in the 1960s Armstrong emerged disillusioned and dropped the pyramid nonsense - as presumably did Hoeh and his tour-buddy Meredith.

Which may well prove that Herb was a smarter cookie than the Seventh-day Adventist brain surgeon.
Posted by Gavin R at 14:20