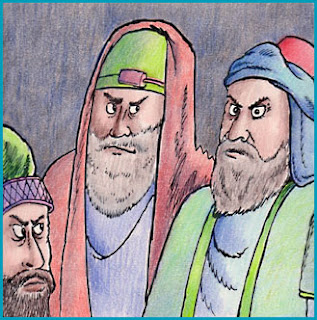 (This is the fourth part of a review of Hyam Maccoby's 1986 book Mythmaker: Paul and the Invention of Christianity.)

'Pharisee' is a byword for bad religion: judgmental, legalistic, conniving, self-righteous, hypocritical, unyielding. That's because Pharisees are portrayed that way in the gospels. They are Jesus' nemeses. Funny head-wear, scowls, beards...

But is this an accurate representation? Hyam Maccoby leaps to their defense in chapter three. Forget everything you thought you knew about the Pharisees; "this Gospel picture of the Pharisees is propaganda, not fact."

Forget, for example, the idea that they were always bickering among themselves about the fine points of doctrine and the Law: "decisions were made by a majority vote. Once a majority decision had been reached, the dissenting rabbis were required to toe the line and accept the result of the vote, not because they were regarded as refuted, but because of the principle of the rule of law, which was conceived in exactly the same terms as in parliamentary democracies today..."

But they "did not invest these decisions with divine authority." Opposing views were recorded for future use and reference. Difference of opinion "was itself an essential ingredient of their concept of the religious life, rather than a danger to it."

"A wide variety of views was tolerated by the sages and their successors, the rabbis, without any accusations of heresy."

Forget the idea of a mindless devotion to the Temple; that's the Sadducees. "The Sadducees turned for leadership to the priests and especially the High Priest." The Pharisees saw these offices as of lesser significance.


Even the High Priest was regarded as a mere functionary, and had no authority to pronounce on matters of religion. It was a Pharisee saying that 'a learned bastard takes precedence over an ignorant High Priest', and most High Priests were in fact regarded by the Pharisees as ignorant.

Christian churches tend to combine ceremonial roles (the Archbishop of Canterbury for example) with teaching roles. "[In] Judaism these two roles have always been distinct..."

Think back to the clash between the established priesthood and the anti-establishment prophets in the Old Testament. The rabbis saw themselves as heirs of the prophets, and left the priestly role to the politically compromised Sadducees.

There's little doubt that Maccoby has the side of the angels in arguing this. The evidence points away from the stereotypes we find in the gospels. Whether it reaches as far as portraying the Pharisees in such a positive light that they seem so thoroughly tolerant and enlightened is perhaps moot, but a bit of overstating (and Maccoby seems prone to overstating) is understandable when confronted with an edifice of misrepresentation that he's up against.

How all of this relates to Maccoby's contention that Paul was never a Pharisee, while Jesus was, will become apparent as he progresses in setting out his position.