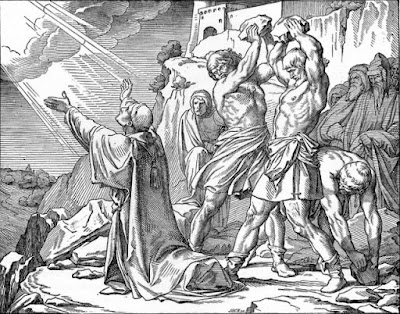 Stephen is the first Christian martyr. But is the account in Acts 7 reliable? Hyam Maccoby thinks not. The problem lies with the attribution of this execution to the Sanhedrin.


"The Sanhedrin was a dignified body that had rules of procedure, and did not act like a lynch mob. It would not suddenly switch the charges against a defendant, or drag him out for execution without even pronouncing sentence or formulating what he had been found guilty of."

The charge brought against Stephen - the same one that was brought against Jesus - was speaking against the temple. In fact Maccoby asserts that the Stephen account "is simply a double or repetition" of the earlier account. Both in Stephen's trial and in Jesus' this charge "is forgotten when the defendant bursts out during the trial with what is regarded as a blasphemous statement."


"Formal procedures are then thrown to the winds and the defendant is found guilty of an alleged crime committed during the trial itself, and different from the crime for which he was brought to trial in the first instance. This travesty of legal procedure in a body like the Sanhedrin... is clearly fictional."

What about the division scholars find between the Hellenistic faction, represented by Stephen, and the Jewish faction led by James and Peter? Maccoby is having none of it. This is simply a case of which language was spoken. The Hellenists were Greek speakers. The real division was between the 'activist' Nazarenes - the anti-Roman faction - and the quietist Nazarenes - those content to wait and hope for their lord's return without upsetting apple-carts in the here and now.

So what really happened? Maccoby is of the opinion that the story is not in fact created out of the whole cloth, and attempts to reconstruct the actual event. Paul was indeed involved in the execution of the radicalized Stephen, but was acting as an extra-juridical enforcer for the High Priest, a Roman collaborator. In this reading Stephen was seen as "a dangerous anti-Roman agitator." This seems to me a step too far into speculation, but does not undercut the critique that has already been offered. The Sanhedrin/Pharisee connection does indeed seem highly problematic.

(This is the ninth part of a review of Hyam Maccoby's 1986 book Mythmaker: Paul and the Invention of Christianity.)