Mythmaker: Of the Tribe of Benjamin 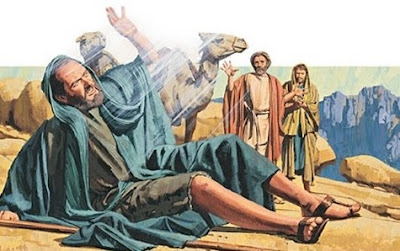 Chapter 9 begins the second section of Mythmaker, now focusing on Paul beyond the Damascus horizon. The story is familiar. En route to Damascus Paul (Saul) is struck down, blinded and converted to the faith he has heretofore persecuted.


"It was through this event that Jesus' movement changed from being a variety of Judaism into a new religion with a theology and myth distinct from those of Judaism."

But there are problems with the story. Unlike Judea, Damascus was not under Roman occupation or rule at the time, having been ceded by Caligula in CE 37. So what kind of mission could he have been on?

Here is where Maccoby gets, in my view, either overly creative or overly literal, depending on your point of view. He suggests that Paul did indeed strike out for Damascus, but his mission was not legal or officially sanctioned.


"Saul must have been on a clandestine mission to kidnap certain leading Nazarenes and bring them back to Judaea for imprisonment or for handing over to the Roman authorities."

The words "must have been" are injudicious. Such things indeed happen even today where client states turn a blind eye to the activities of foreign powers wishing to apprehend persons of interest on their territory. But is this what Paul was on about? This assumes a historicity that may not be much more than an ancient 007 tale.

Maccoby isn't finished. He turns to a fascinating verse in Galatians (3:14) which reads "in order that in Christ Jesus the blessing of Abraham might come to the Gentiles, so that we might receive the promise of the Spirit through faith." Creative commentators have wondered at Paul's identification here with Gentiles, almost as if he considered himself one. Maybe he's just one big cuddly ball of empathy? Not likely given his frequent rants.


"A better explanation... is that Paul here, in the heat of his emotion, has forgotten his persona as Pharisee, and has lapsed into his real identity and motivation."

That statement requires some backing up, but Maccoby has some further strings to this bow. One is the problem with Paul's claim to be a Benjaminite.


"As it happens, it was impossible for any Jew at this time to describe himself truthfully as of the tribe of Benjamin."

The reference here is to Romans 11:1 and Philippians 3:5.


"While it is true that part of the tribe of Benjamin survived in Palestine after the deportation of the Ten Tribes by Shalmaneser of Assyria, the Benjaminites later intermarried with the tribe of Judah to such an extent that they lost their separate identity and all became Judahites or Jews. Only the Levites, the priestly tribe, and that section of the Levites called the kohanim or priests (the descendants of Aaron) retained their identity because they needed to do so for cultic reasons."

So, what do we make of the claim? Sheer bluff.


"... when Paul described himself as 'of the tribe of Benjamin', this was sheer bluff, although the recipients of his letters, being Gentile converts to Christianity, were in no position to know this."


"According to the Ebionites, Saul's parents were Gentiles who had not been converted to Judaism [although he concedes they may have been 'God-fearers']; Saul himself, then, was the first of his family to be converted."

Again, perhaps Maccoby is stretching the evidence a little too far, but if he hasn't offended his Christian readers to the point of red-eared rejection, he certainly will have caught many off balance.


(This is the tenth part of a review of Hyam Maccoby's 1986 book Mythmaker: Paul and the Invention of Christianity.)