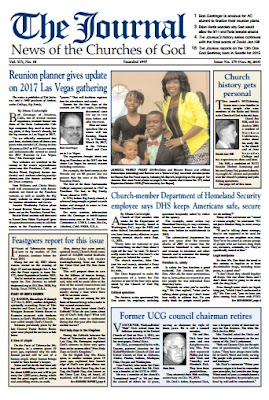 The November 30 issue of The Journal has been released, and can be downloaded in PDF form.

In this issue, news of an Ambassador College reunion scheduled for 2017 in Las Vegas. The organizer is Bob Gerringer (who in a past life was one of the founders of Ambassador Report. I guess advancing age really does ramp up the nostalgia). Alumni from Pasadena and Bricket Wood can visit a dedicated website for more information, while there's another with details for former Big Sandy students.

The first part of a personal account relating to his involvement in the church by the late David John Hill, a former WCG evangelist, gets a repeat outing in this issue.

Lest one gets the impression that this issue is the rose-colored spectacles edition, Brian Harris, an outspoken advocate of British Israel bullgeschichte, has contributed an article entitled "Why Did God Allow 9/11 and the Paris attack?" How myopically predictable is the content of that one! And yes, it completely lives up to the reputation for racist, jingoistic pabulum that characterizes BI.

Perhaps somebody should submit it to The Onion.

This issue runs to 16 pages, including the ad section, and includes a couple of reports from 2015 Feast sites including the Ian Boyne-led Jamaican CGI (not to be confused with GCI). Exactly what relationship the Boyne CGI has to the Texas mother church is unclear to me, but they certainly seem to operate out of their own rule book. Unusually for an Armstrong group, the Jamaican brethren were treated to a debate.


Our usual speaking competition had addressed the controversial matter of divorce and remarriage. This year was unusual as it became a real debate with one of the participants who disagrees with the church’s position given the opportunity to make a full presentation to show why the church is wrong. However, her arguments could not match those of Stephen Scale, the 2014 champion of the competition, who regained his title in a sensational presentation in which he debunked the view that there were no grounds for remarriage. Mr. Scale looked at the best arguments for the no-remarriage view, drawing on scholarly sources, and refuted all of them.

Well, let's give them credit. A "real debate". Can't see that being adopted by other splinter sects. Let's see, how about the CGI in Texas inviting Lonnie Hendrix to make a presentation at their feast site? Nope, can't imagine that. Mind you, lest we get carried away with just how enlightened this all is, Boyne's reporting seems just a tad gleeful don't you think? And did you notice that Scale gets acknowledged by name, but not his debate partner?

I wonder how long Ian spoke after Scale's rebuttal to ensure that everyone fully understood that the forces of righteousness had indeed triumphed?