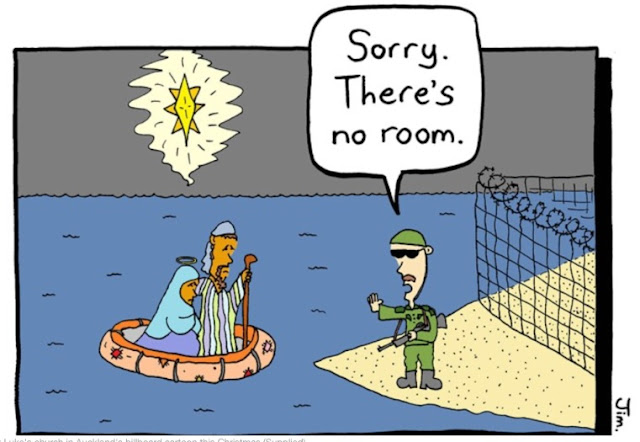 There's a lot of truth to this billboard graphic, posted outside St. Luke's Presbyterian Church in Auckland (report here). It's being described as 'controversial', though it's hard to see what could possibly be controversial in a Christian community drawing the public's attention to an issue related to the core values that Christians are supposed to uphold.

Jesus' family were, lest we forget, once refugees themselves, according to a literal reading of the gospel narratives. Fleeing from Herod, they moved to Egypt for sanctuary. I briefly commented on this in a letter submitted to the upcoming issue of The Journal: News of the Churches of God, where such an act of compassion is apparently anathema to a large number of readers (see an earlier post here).

Bitter irony too in the Australian government's use of a distant locale known as "Christmas Island" as a detention centre for refugees.

(A nod of the noodle to the person, who I believe wishes to remain anonymous, who drew the billboard to my attention.)