Are You an Evangelical? 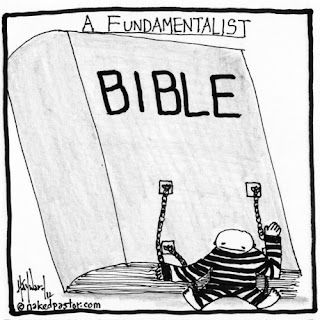 'Evangelical' means many things, and in the best of worlds it would reflect the Reformation definition which basically means, to quote the words Bob Brinsmead used to devastating effect in his critique of Seventh-day Adventism, "judged by the Gospel".

But the buffoons at America's National Association of Evangelicals couldn't have that. In partnership with something called LifeWay Research they've cooked up their very own four-point formula.


1. The Bible is the highest authority for what I believe.

2. It is very important for me personally to encourage non-Christians to trust Jesus Christ as their Savior.

3. Jesus Christ’s death on the cross is the only sacrifice that could remove the penalty of my sin.

4. Only those who trust in Jesus Christ alone as their Savior receive God’s free gift of eternal salvation.

All of these statements are problematic. Worse, they run contrary to anything that might be described as genuine Christian theology; Protestant, Catholic or Orthodox. For these folk the Bible is their "paper pope", hallelujah, and their lives are circumscribed by sin and guilt passed down from imaginary forebears in a mythical garden. Worse, they turn faith into an act of assent that merits "eternal life"... like a bad TV offer, "free", but subject to conditions.

The more I think about it, the more I'm convinced that this perversion of Christian faith is as big a "heresy" as any of the usual suspects. Indeed, maybe more-so.

It's not so much who's included in this definition, but who's excluded. But then 'evangelicals' have always been keen to reassure themselves that they're in the community of the saved by building walls to keep the riff-raff out; especially those who ask irritating questions.

More than a century ago a group of goofballs got together to publish "The Fundamentals", a series of papers published in twelve volumes and funded by a couple of oil company executives, thereby giving us the term fundamentalism. A hundred years later it seems nothing much has been learned by their spiritual descendants.
Posted by Gavin R at 13:35