For anyone who hasn't yet been seduced by its allure, issuu is a fantastic way to enjoy publications, mainly magazines but also a range of books (some full, others samplers), both well known and obscure. This week, in the first of what might become a semi-regular series, here are a few of my recent discoveries.

BBC History: Vikings vs Anglo Saxons, Who were the Celts?, The Royal Navy's American Disaster. What's not to like in the full 100 page November issue? There might even be a few BI devotees who could profit from that Celts article.

Australian Geographic: Now that Rupert Murdoch has set about gutting National Geographic, it might be time to explore alternatives. The November-December issue of Australian Geographic has a distinct Aussie focus, but also some intriguing features for those beyond the Lucky Country, including Alien Oceans - love the artwork! 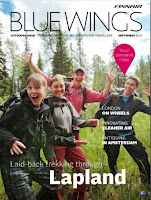 Blue Wings: The magazine of Finnair, helpfully published in English. The complete September issue has been uploaded featuring the violin makers of Cremona; the beaches of Brittany; Hoi An in Vietnam and the joys of pedaling through 21st century London. On a more Finnish note, trekking tours through Lapland. Airline magazines aren't to everyone's taste, but hey, how many people do you know who've thumbed through a copy of this one?

issuu takes a bit of getting used to, the search function is - shall we say - idiosyncratic, and the "suggestions based on everything you read" can often be eye-brow lifting, but it's nonetheless a great way to stay up to date with more magazines than you'll find in all the dentist's waiting rooms within a 100k radius. The iPad app is just brilliant.