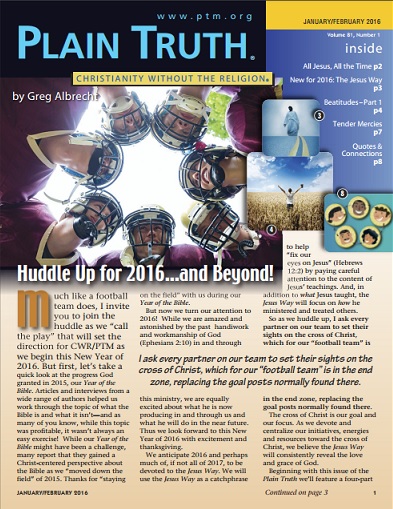 Once upon a time there was a magazine. It was called The Plain Truth. This free magazine had many faults, not least some very questionable content. The people whose names topped the editorial masthead were, with few exceptions, not particularly nice. Nor, one suspects in hindsight, particularly sincere. However the magazine was, for its time, lavishly produced. Countless children cut it up to illustrate school projects. Some adults, under the spell of its glossy pages and simplistic messages, took it seriously enough to become enmeshed in its sponsoring church. They then discovered that 'free' could be a relative term.

Then along came Greg. Greg Albrecht. Exactly how the ownership of The Plain Truth passed to Greg is not entirely clear to me. Why it was offered up in a church 'fire sale' of assets is also unclear. But it was. Greg quickly drove down circulation, which probably wasn't his intention. Greg also relaunched himself, no longer a senior minister in an abusive sect but, believe it or not, an advocate of niceness-saturated, religion-free Christianity.

Even unto this very day, the Albrecht Plain Truth endures. Not so glossy. Eight pages long. Published six times a year, circulation undisclosed. Fair to say, I suspect, that it's widely ignored and a mere shadow of its former self.

What is striking about the January/February PT is just how much of the entire issue is written by Editor-in-Chief Greg. Ruth Tucker has a one page column, and the back cover is the usual pot pouri of fluff, leaving six pages. How many of these are written by Greg Albrecht?

Even in the days of Herbert Armstrong it would be hard to find this level of journalistic narcissism.

Available in flipping format (to keep Douglas happy) and - for the rest of us - PDF.

As for whether the Albrecht-sodden PT has equally questionable content as its predecessor, I'll let you be the judge.