... if anyone proclaims to you a gospel contrary to what you have received, let that one be accursed! (1:8-9 NRSV) 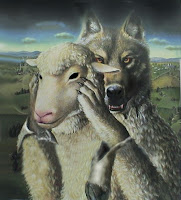 The Paul of Galatians famously comes across as an egotistical ranter. He simply doesn't handle theological diversity well! It's his way or the highway, no matter that senior figures in the early Christian movement (Peter, James) have quite a different take on things than he does. Forget all the elevated prose you might find elsewhere - the fruit of the spirit, the love chapter - in Galatians Paul lets the mask slip, and it's not a pretty sight.

And thus, ever since, the apologists have fretted over this ugly self-portrait. Poor Paul, the commentators usually say, he was so passionate in defending the Galatians against heresy he did get rather worked up, but who can blame him?

There are other ways of looking at passages like this. The obvious one is that Paul was a deeply threatened and insecure man, well aware that his claim to apostleship was built on shaky ground, and out of step with the rest of the church. In short, the apostle protesteth too much. I don't see that this is too much of a problem for Christians to come to terms with in that, after all, Paul was obviously a flawed human being just like the rest of us.

Bibliolatrists will of course disagree.

A second approach is that we misread Paul's hissy-fit. He didn't really mean to curse anybody. It's all a terrible misunderstanding. Mark Edgecombe takes this view in the latest issue of Stimulus.

What does Paul mean when he wishes eternal condemnation - not once, but twice - on those preaching a gospel other than the gospel of Christ? ... perhaps he means this: that those who preach the law are wilfully opting into ongoing subjection to a curse.

Yeah, right. You see, they're doing it to themselves. It reminds me of the woman I once met at a parent-teacher conference who appeared with facial bruises. The community knew very well that her husband was a drunken sot with a long record of domestic abuse. I was new to the job and aware that it wasn't my role to say anything, but the shocked expression on my face must have spoken anyway. The first thing the woman said, in a tone that dared me to contradict her, was that she'd walked into a door!

No, Paul didn't curse anyone, oh my goodness gracious no. If they were cursed it was their own fault, silly people, as they had wilfully opted into a beating.

Let's back up a bit. Is Paul is defending the "gospel of Christ"? We've got to concede that if he was, his opponents (fellow Christians) thought they were doing that too. No, he's defending the gospel of Paul: "the gospel that was proclaimed by me." Go through just chapter one of Galatians and notice all the 'me' and 'I' statements. It's an eye-opening exercise.

Galatians is about a territorial dispute, and Paul is marking his territory. So does he mean to lay down a curse or not? It seems a no-brainer. It doesn't much matter whether you want to understand accursed as hell-bound or excommunicated, it amounts to the same thing. Like an abusive husband Paul can mutter sweet nothings when necessary, but to accept them on face value is naive in the extreme. Shades of megalomania (a term Edgecombe actually refers to)? Quite possibly.

I persevered through the article, and was unsurprised when the writer went on to beat up on Richard Holloway and Lloyd Geering (or did I get that wrong - maybe they slapped themselves silly.) Anyway, of these two figures he writes, "it's the kind of stance that Paul wouldn't have a bar of."

Well at least he got that right.

Not to bother, Lesslie Newbigin gets a pat on the head.

I can't wait for the next installment to find out what kind of creative exculpatory rereading will be applied to Galatians 5:12!
Posted by Gavin R at 21:23