Cats among the Creationist Pigeons 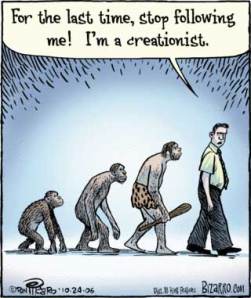 The old certitudes are crumbling, even among the ranks of America's evangelicals, judging from a lead story in the current issue of Christianity Today.

Under pressure is the commitment of evangelicals to a literal Adam and Eve. The issue is particularly acute in the Reformed camp, with its rigid, over-theologised dogmas and dour view of humanity.

Pushing the boundaries is the BioLogos Foundation, much to the chagrin of hand-wringing Calvinists who fear that their theological house of cards is about to come down. We can only hope!


[T]he emerging science could be seen to challenge not only what Genesis records about the creation of humanity but the species's unique status as bearing the "image of God," Christian doctrine on original sin and the Fall, the genealogy of Jesus in the Gospel of Luke, and, perhaps most significantly, Paul's teaching that links the historical Adam with redemption through Christ...

Theistic evolution seems, despite this, to be in full cry, largely thanks to the advocacy of Francis Collins, and the scientific evidence cited is impossible to dismiss. That's too much, however, for some to swallow. Their objections have nothing to do with the science, but everything to do with a mangled anthropology.


Vices we associate with consequences of the Fall and original sin, such as self-serving behavior, exist in lower primates and would have been passed on via evolution to humans. Thus Eden "cannot be a literal description of how things really were in the primal human past."

Reformed clergyperson Richard Phillips is quoted in the CT article: "Can the Bible's theology be true if the historical events on which the theology is based are false?" he asks. If science trumps Scripture, what does this mean for the virgin birth of Jesus, or his miracles, or his resurrection? "The hermeneutics behind theistic evolution are a Trojan horse that, once inside our gates, must cause the entire fortress of Christian belief to fall."

Not so likely. A broader Christian belief - outside the swarming ghettos of Reformed Evangelicalism and fundamentalism - can clearly cope with the reality of human origins. If a theistic acceptance of evolution does indeed bring the hammer down on an Augustinian view of "mankind" as fallen and deserving of eternal punishment... well, that's got to be good news for everyone.

This is one CT article that is well worth a close reading.
Posted by Gavin R at 17:43

Email ThisBlogThis!Share to TwitterShare to FacebookShare to Pinterest
Labels: Creationism