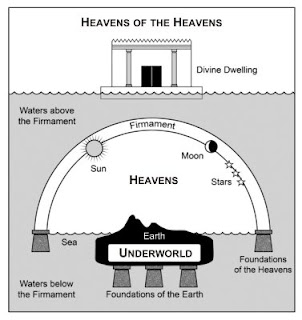 There's been a bit of bloggery on the events associated with Ascension Day (Himmelfahrts in German).  James McGrath got the ball rolling, and Scott Bailey has joined the fray.  In the original story, the resurrected lord hops on a slow-moving cloud (helicopters being unavailable at this point in history) and is wafted up, up and away in clear view of all.  The tale derives inspiration, in part, from the earlier ascension of the angel Raphael in the book of Tobit (12:15-22) which is a personal favourite of mine in the deuterocanonical literature (man, would it make a great graphic novel!)

James McGrath puts it in a nutshell: "Ascension day is a perfect day to draw attention to the fact that literalism is not only problematic, but impossible," and he cites Dunn and Ward in support.  Scott Bailey goes further by pointing out the cosmology: "we can’t really take this story literally for a variety of reasons. Literally Jesus goes up to heaven in the story. This ‘perspective’ is built on the cosmology of first century persons".  He also provides this nifty diagram, which is one of the better representations I've seen, which answers other equally head-scratching puzzlers like, "where did all that water come from to float Noah over the top of Everest?
Posted by Gavin R at 10:16