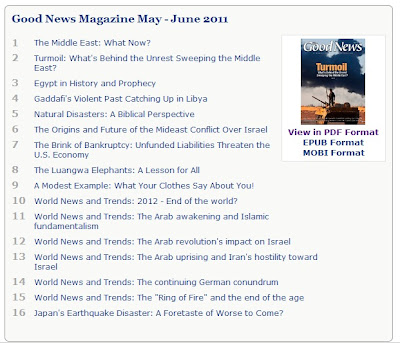 A minister in one of the smaller post-Herbal sects (let the reader understandeth) recently commented negatively on "headline theology"; the idea that you can - and should - read Bible prophecy right out of (or into) your daily newspaper. His particular church seems to have de-emphasised the "watch world news" call. This activity isn't the same thing, according to this worthy bloke, as actually preachin' the gospel.

And of course he's right. Whether in the dispensationalist camp of Hal Lindsey and Dim Tim LaHaye, or in the boggy marshlands of fringe Adventism, speculation on how the End Times fit in with the latest Time magazine is rife. The signs of the times have been legion: the Suez Canal crisis, the Six Day War, instability in Yugoslavia (remember Yugoslavia?), or the rise of Mussolini; you can be sure "prophecy marches on, brethren!"

You'd think by this time folk would have wised up. But no, the 'players' in Casino Apocalyptic have passed the point of 'prediction addiction' reversal. There are few plainer examples (or cautionary tales) of this than the magazine called (paradoxically) The Good News. The latest issue brings its cutting insights to bear on the Middle East. Just take a look at the table of contents! And yes, they also produce a dedicated magazine and website called World News and Prophecy!

Features called "World News and Trends"?, you'd think it was a current events magazine... which is exactly what it mimics. In case you think this is a one off, the January-February issue was based around the theme 'Signs of the Times'.

What has this stuff got to do with Christianity?

I guess all churches - especially those competing for a nice, fat tithe dollar - want to appear 'relevant,' and there's no straighter road to relevance than attaching yourself parasitically to the news of the day. But there's a small problem: a zero percent success rate in prediction.

The GN calls itself "a magazine of understanding," a subtitle it filched from the old Plain Truth. These guys, however, have so little understanding about things in general that they couldn't foresee, let alone solve, the very predictable crisis that engulfed their own organization over the past few years, leading to disenchantment and schism.

But here they still are, older but no wiser, playing the poker tables at Casino Apocalyptic, hoping that the real world will somehow suddenly conform to their half-baked assumptions about Bible prophecy.