Clobbering Palestinians with the Bible 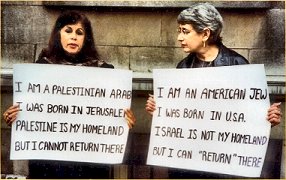 The Bible has played a fundamental role in the creation and existence of the modern state of Israel, and, some say, in the continued suffering of the Palestinian people. Today, the Hebrew Bible is used as an authoritative text to justify the placement of Israel’s borders, and to legitimise and even encourage the expulsion of Palestinians from the land. The New Testament has also been utilised by Christian Zionists who argue that the establishment of the state of Israel is God-ordained, and that its existence is necessary for enabling the second coming of Jesus.


Deane Galbraith has a straight-talking piece on the abuse of Old Testament texts to justify the continued displacement of the Palestinian people.  It's quite a contrast to the largely uncritical, servile propaganda that litters conservative Christian websites.
Posted by Gavin R at 14:35