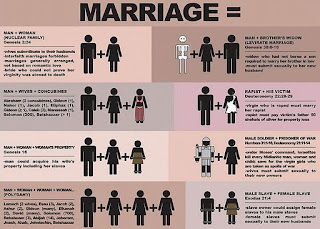 Have a close look at it yourself.  Tim concedes that "In one sense the graphic is true."  I'd agree with that.  It simply consists of examples of marriages that are described in the Hebrew Bible, and a sorry assortment most of them are.  All these forms of marriage are implicitly endorsed in the context of the culture of those times.  I don't imagine that any other option was available when we consider that the Old Testament is a collection of ancient Near Eastern literature, not a hint of post-Enlightenment scruples to be found anywhere.

Then Tim makes an amazing statement: "In terms of the teaching of Scripture it is clear that Gen 2 is a privileged text (Jesus and Paul both cite it when discussing marriage)."

Genesis 2 is a privileged text?  In what sense?  Both Jesus and Paul cite other texts too.  Or, to be more specific, Paul and the Gospel writers cite other texts.  There were no "red letter" options available to indicate Jesus' actual words, quotation marks had yet to be invented, and speaking of "invented", much (please note that I'm not saying all) of the material attributed to Jesus has clearly been put into his mouth.  Tim's decision to anoint Genesis two as "privileged" is entirely theological and subjective.

Tim falls back on bluster: "do any of these represent “a biblical view of marriage”. Hell no! It is time for some stakes in the ground... in this (as in everything else) human sinfulness warps and twists God’s intent. All of the “biblical” marriages listed in the graphic reflect this."

The problem is that, as Tim knows full well, the documents themselves contain little or no condemnation of these customs.  If there's warping and twisting going on, wouldn't you assume that this would be signalled within the text?  Not over in the Pastoral Epistles, mind you, written centuries later and falsely attributed to Paul, but within the specific Old Testament books they occur in?

The problem only arises if we assume that the Bible must contain some kind of inspired revelation on marriage, some kind of comfortable benchmark that endorses equality and mutuality between partners.  As the graphic clearly demonstrates, it does no such thing.