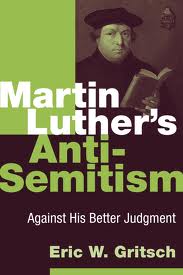 Eric Gritsch is an ELCA theologian, author of The Wit of Martin Luther, A History of Lutheranism, and a number of other significant works.  He was also recruited, like young Joseph Ratzinger, into the Hitler Youth in the dying days of World War II, later studied under Holocaust survivor Viktor Frankl, and recently completed a book entitled Martin Luther's Anti-Semitism, published by Eerdmans.

This is a subject widely neglected among Lutheran Christians, and when it is raised, as it ought to be, it is often met with prevarication and denial.  While Lutheran pastors and lay people are keen to beat their gums on justification by faith, grace alone, and the boldness of the Reformer who stood up to Rome with his battle cry "Hier stehe ich!" (Here I stand), not so many are willing to talk openly about his scatological rhetoric on Jews or his violent reaction to the so-called Peasant's Revolt.  Luther's colleague Melanchthon referred to his friend's controversial and intemperate nature as rabies theologorum, the rage of theologians.  There have been more than a few "mad theologians", past and present, but Luther surely set a high-water mark.

Well, nobody likes to have the skeletons in their closets rattled under their noses, or have outsiders pointing gleefully to their founder's feet of clay; but then again, if we don't learn to look our own history in the eye, how then can we move on?

Gritsch is not just another semi-apologist seeking to sandbag Luther's anti-semitism with a thousand qualifications.  This is the best treatment of the issue I've seen anywhere.  Within the covers of a small book we have an intelligent, honest appraisal of the man, his limitations, and the legacy of his ill-considered outbursts.

Was Luther a genius or a villain?  Both and neither.  At the risk of sounding preachy, maybe the man's own coinage might apply. Simul Justus Et Peccator, both sinner and saint.  I just wish conservative Lutherans, particularly those in the synodical ghettoes of Missouri and Wisconsin, would front up to the tragedy of his vicious limitations.
Posted by Gavin R at 20:34