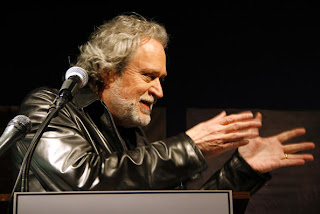 Dr. James Tabor is no stranger to controversy in the world of Biblical Studies, especially as it intersects with archaeology.  His career began most inauspiciously, at Ambassador College in Pasadena, before gaining credibility with legitimate degrees and teaching posts.  Dr. Tabor, now a longtime professor of religious studies at UNC Chapel Hill, is undoubtedly a decent and sincere man, an impression that has come through strongly in personal correspondence I have had with him on a variety of issues.

Like a moth to the flame, Tabor - along with filmmaker Simcha Jacobovici - is back in the limelight with a new archaeological discovery to revolutionize our understanding of Bible times.  Or maybe not.  There has been almost universal skepticism over those claims from those best qualified to judge.  Andrew Vaughn, executive director of the American Schools of Oriental Research (ASOR) put it bluntly: "In my assessment, there's zero percent chance that their theory is correct."

I suppose it might seem crass to describe the discovery as "fishy" (much is made of a fish symbol in the new tomb), but the team that previously brought us "the Jesus family tomb" seems to have spent its credibility capital all the way down into overdraft.  Stephen Fine observes:


The interpretation presented by Professor Tabor is not grounded in the evidence, nor in even the most basic rules of art-historical analysis. The image has nothing to do with Jonah, Jesus, or Judea in the first century. Elsewhere I have referred to this genre of media-driven discoveries as the “DaVinci Codification” of our culture—the presentation of odd and associative thinking previously reserved for novels as “truth” to the general public. The “Jonah Fish” is just the next installment in the Jesus-archaeology franchise—timed, as always, to precede a major Christian feast.

I, for one, am wearied by the almost yearly “teaching moment” presented by these types of “discoveries.” I am hopeful, however, that—this time—a forceful and quick display of unanimous dissent by the leading members of the academic community will be taken seriously by the media and the public at large. (Full comments on ASOR)


Of course, there's a book - just released - to flesh out the claims.  The Jesus Discovery (co-authored with Jacobovici) follows in the wake of The Jesus Dynasty and, well off the mass market circuit, Restoring the Abrahamic Faith (reviewed here in 2009).  Having read the earlier two, I think I'll pass on the latest.

Mind you, the mullahs of the Missouri Synod are very excited!  Paul McCain seems to have swallowed the fish, fins and all.
Posted by Gavin R at 10:17