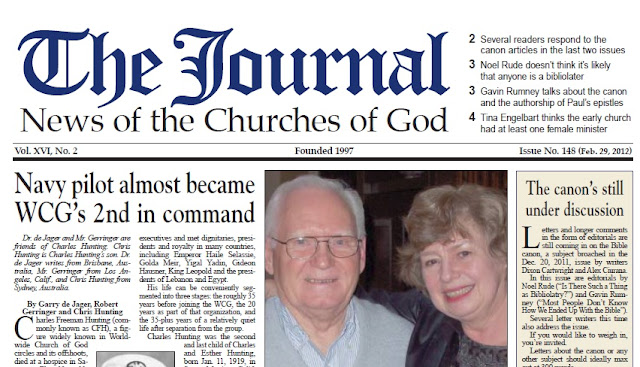 Debate on the canon continues in America's most distinctive tabloid church publication, The Journal: News of the Churches of God.  A version of my own canon article appears in the latest issue along with the following letter from David V. Barrett.

I see your [Dixon Cartwright's] Bible-canon rethink has created some waves.

It’s a matter of scholarship vs. belief, I suppose. I think you pointed out that the first list of the New Testament as we know it was as late as Athanasius in A.D. 367.

In many early Christian churches several books (Revelation and six epistles including Hebrews) were regarded as “doubtful,” and others (the Epistle of Barnabas, Shepherd of Hermas and Apocalypse of Peter) were often included in the canon.

But even today different parts of Christianity have different versions of the Bible — not just the Catholic and Protestant inclusion or exclusion of the Apocrypha but the Eastern Orthodox and Ethiopian Orthodox churches—including several extra books.

We tend to take the Bible as “given.” But the complications of its composition, the fluidity of its content—and the authenticity of some of the books such as 2 Peter — really deserve more attention from those who have it as their sacred text.

Speaking of the book of Revelation, imagine how much less apocalyptic certain preachers would have been — William Miller, Herbert W. Armstrong, Harold Camping, Ronald Weinland — if Revelation hadn’t made it in.

I’m giving a talk on failed prophecies of Jesus’ imminent return next week before someone else’s talk on 2012 prophecies. I’ll finish up by saying we won’t need to worry about December 2012 if Ron Weinland’s right about May 27.


Also included in this issue is discussion of women's ordination in the COG tradition, a tribute - along with some interesting historical background - to the late Charles Hunting, formerly a high profile WCG evangelist.  There's a half page ad from William Dankenbring headlined "The Armstrong Era is OVER - It's Time to Move Forward!"  (Guess in which general direction Dankenbring would like you to move!)  And, of course, for COG news addicts, that's just a selection of what's on offer.  Once again Dixon Cartwright has provided a full PDF version of the paper for free download, which you can access here.

Update:  You know this is a better than usual issue of The Journal when LCG's Doc. Thiel throws a hissy fit over its contents.

The latest issue (print date February 29, 2012) of The Journal just arrived here electronically.  The two main topics of this issue were related to the role of women as possible pastors etc. and arguments about the biblical canon... overall, this was one of the most disappointing issues ever of The Journal.  Typically, I quote, link, and comment about certain parts of The Journal, but today I will not quote it nor link to it.