Just What Do You Mean - Protestant? 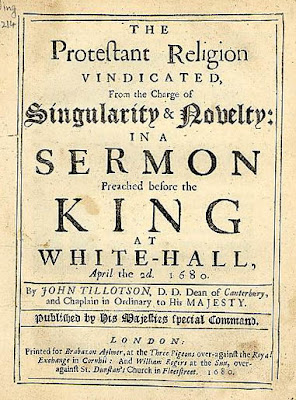 What is a Protestant?

My parents' generation entertained few doubts.  It was basically anyone who wasn't Roman Catholic.

And can you regard non-Trinitarian sects like Christian Science as Protestant?  My father, for much of his life a camp follower of Mary Baker Eddy, certainly did, and I wasn't going to be the one to disillusion him.  I mean, does someone have a certified list of criteria?  (Kiwis might also ponder the nature of the much neglected Ratana and Ringatu faiths.)

The Great Protestant/Catholic Divide only really made sense in the kind of culture where Western Christianity was the de facto faith of all right-thinking, decent, patriotic citizens.  Eastern Orthodox Christians?  Who even cared?  Coptic Christians?  Who the heck are they?

Atheism was seen as the preserve of decadent, dissipated, chinless, university-educated types, so they hardly counted in any discussion.  Remember the old joke about the thugs who bailed up a hapless drinker in a Belfast pub demanding to know whether he was Catholic or Protestant.  "I'm an atheist," he replied.  "Yes," came the response, "but are you a Catholic atheist or a Protestant atheist?"

And what about non-Christian faiths: Baha'i, Islam, Buddhism?  They were beyond the farthest pale for the good folks of the 1960s - at least where I lived.  Exotic beliefs of 'foreigners'; need one say more.

But the world has changed, thank God, and it seems - to me at least - that this contentious term Protestant is rather rapidly disappearing from common usage.  It is perceived as a nasty, narrow term, spouted forth by the likes of the not-so-reverend Ian Paisley.  Would anyone under forty describe their faith as 'Protestant'?  In the twenty-first century it arguably makes good sense, and is a measure of good taste, to flush the thing completely.

Lutherans, for example, have much more in common with Catholics than Baptists or Open Brethren.  So do elements of ye olde Church of England, despite the fact that no church body has more enthusiastically spawned schisms than the Anglican communion, ranging from the various Darbyite Brethren sects to the Salvation Army.

I'm sure there are people who still run to a dictionary to resolve conundrums like these.  The trouble is that dictionaries simply provide the current common usage, not an inspired and inerrant definition that will be the final word on the subject.   Here's what God's favourite dictionary (and if not God's, then mine) saith on the subject.


a member or adherent, or someone who shares the beliefs, of one of those churches founded by the Reformers (formerly by some confined to Anglicans or Lutherans, now disavowed by some Anglicans), or any of the churches which have developed or separated from them... [The Chambers Dictionary, 12th edition, 2011]

You could drive a truck - indeed a whole fleet of lorries - through that sucker!

And what in hades do you do with the deviant prosperity gospel cults that mimic older denominations, but have elevated an "I deserve a blessing" message to the forefront of their proclamation.  Is Joel Osteen even Christian, let alone Protestant?

Presumably the concept of 'Protestantism' will endure a little longer in Northern Ireland where the Great Divide is entrenched in bitter sectarian history, and as a handy 'one size fits all' label for old school Catholics to paste as they please.  But for the rest of us it may be time to simply lay the term to rest.
Posted by Gavin R at 14:41