Two authors on the future church 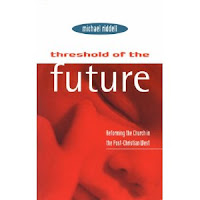 As is probably apparent from a couple of recent posts, I've been reading Mike Riddell's 1998 book Threshold of the Future.  Riddell is a New Zealander, and (if dim memory serves me right) spent some time teaching at my old school, Hamilton Boys High, during my time there, before moving on to become a Baptist minister, then a theologian of some note, holding positions at both Auckland and Otago universities, and providing intellectual grunt to the so-called "emerging church" movement both in this country and internationally.  At the time he wrote he was still teaching theology at Otago, and still identified with the progressive element within the Baptist communion.

There's a lot to admire about Riddell's honesty in Threshold.  He saw clearly the impending end of Christianity as we know it, and the need to find a radical solution before we reach the point of no return.  In the end however he was able to provide no satisfactory strategies or suggestions, other than a variation on self-indulgent house churches - a very Baptist thing to propose - along with (at least this is my impression) a retreat from intellectual rigour.  It is always easier to identify a problem than resolve the issues, and the issues that are undermining the Christian world view are Herculean.

Given that Riddell wrote well over a decade ago, I was amazed to find that not long after writing the book he had resigned from his position at Otago, walking off the battlefield to reinvent himself as a Catholic layperson.

At the same time I've been reading Gerald Kieschnick's Waking the Sleeping Giant.  Kieschnick was at the time (2009) president of the Lutheran Church - Missouri Synod.  He too writes about taking the church (specifically the LCMS) into the future, though unlike Riddell he was quite happy to rearrange the deck chairs rather than countenance anything even remotely radical.

Kieschnick was a victim of 9/11 in an indirect way.  Despite impeccable credentials as a rather naive conservative himself, the even more wooden-headed fundamentalists and myopic legalists in the Synod found him wanting because he authorised a representative of the Synod to participate in an inter-faith gathering at Yankee Stadium to - horror of horrors - offer prayers for the those who died.  This, according to the hard-liners, was "unionism" (a term with a specific meaning in the LCMS relating to doctrinal compromise) and "syncretism".

Though Kieschnick was scarcely 'liberal' or 'progressive', he was brought down by reactionaries in the Synod, and replaced by the mustachioed 'Darth Vader' of the sect, Matthew Harrison.

Facing up to the need for change can be a dangerous thing.  The church is undeniably change resistant.  It may suffer a little tinkering about with its worship patterns, but you get anywhere near a nerve - even when it's necessary to save its life - and the beast will bellow and likely trample you.

The Missouri Synod is, thank God, atypical, and arguably now has the leadership it deserves.  But the 'emerging church', quite a different kettle of fish, has also been largely unsuccessful in bringing about substantive or systemic change.  What do they both have in common?