"This could be America's last call to repentance and faith in Jesus Christ, God's only Son, who is coming again one day very soon to save His own and to judge those who don't know and worship Him." 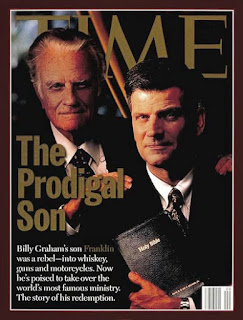 Thus speaketh Franklin, son of Billy.  The "last call" he's referring to is an evangelistic campaign scheduled for next year featuring the old man, who will then be ninety five.  Talk about an inflated sense of his own significance.

Franklin is one of a long line of ne'er do well offspring of evangelists who, after making an energetic and colourful break from the restrictions imposed in their youth, suddenly wise up to the fact that there's money in the religion business, and with a bit of crawling back to dear old dad, they're in line to be the next guy who gets to sign the cheques.  Can we all say nepotism together...

Franklin has always had a problem when it comes to running off at the mouth while the brain is in neutral, and the current US election is no exception.  Father and son have implicitly endorsed their favoured candidate, and then built political rhetoric into their religious message... a nice tax exempt perk.

Of course everyone is entitled to an opinion and a vote to go with it.  But to wrap that up in a cloak of self-righteous sanctity, and entwine it in self important End Times blather; well, that's ratcheting it up to a whole new level.

"My father watches the news every day, and he is deeply concerned about the enormous moral issues facing our country.  That's why your vote on Nov. 6 is so critical."

Big deal.  Since when did watching TV news (let me guess... Fox?) make someone an expert? 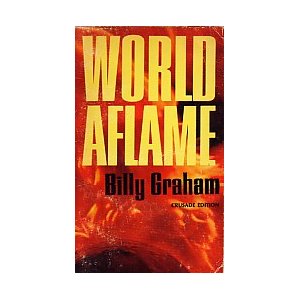 And what does Franklin consider the big moral issues - informed by "biblical values"?  Poverty?  Justice?  Peace?  Not so likely.  These guys would do well to consider the moral issues around Bible thumping in the name of God, and those con artists who extract bucks from wallets and purses by pretending to hold some kind of divine commission.  That kind of moral issue seems never to have disturbed them.  They're usually too busy playing "ain't it awful" by contemplating what's happening below other people's belt lines.

"So pray and then vote on Nov. 6, asking God for His mercy and grace upon our land. There’s still time to turn from our wicked ways so that He might spare us from His wrath against sin."

Billy Graham created his substantial reputation and undeserved credibility by manipulating the fears and insecurities of millions over his long career.  Even as a kid I remember the effect his tawdry little hellfire book World Aflame had on people I knew.  Some would say that he has moved on from his earlier fundamentalism.  Maybe so, but the news doesn't seem to have reached Franklin yet.  Clearly for him, that old World Aflame fear religion is alive and well.

Why is it that we condemn as sectarian this kind of exploitation when it's done by fringe groups, but mutter 'amens' when someone clothed in 'respectability' does the exact same thing.

You're welcome to consider Franklin Graham a saintly soul if you like, but he sounds an awful lot like some of the less glorious religious hucksters in the business.  And somehow that makes this latest round of Bible-clutching, wallet-stroking political posturing even more loathsome.
Posted by Gavin R at 19:25