The Church of England is due to decide later today whether women will be permitted to ascend to the high office of bishop within its British jurisdiction. 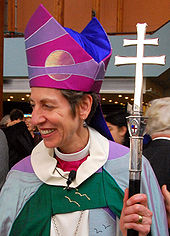 Of course, many Anglican franchises outside the UK have already decided in the affirmative.  The welcome result has, as a kind of collateral joke, meant the garish sight of highly intelligent women who should know better, togging up in ridiculous ecclesiastic garb, including the traditional mitre and crozier.  The irony is that while men dressed in clerical drag look completely bizarre, women tend to look even worse.

But that's a minor matter.  If, for whatever twisted reason, you decide a church should be run on the imperial model of a dying Roman Empire, then it seems only fair that women should now have a crack at it.  We can only hope the C of E finally does the right thing.

But the bigger question is, what the heck is anyone still doing keeping the hierarchic episcopal model alive in the twenty-first century.  Just look at the result in Sydney, or even Christchurch.  Should any Christian be prepared to surrender power to a preening purple pyramid scheme promoting privilege?  The age of kings, barons and lords of the realm is long gone, and yet it endures in certain churches.  And why would any self respecting man - let alone woman - want to embrace that anachronistic and toxic style of leadership?

Yes, Anglicanism has given us many good and worthy things over the centuries, including a rich tradition of church music and a handful of brilliant theologians (none of whom, naturally, became bishops).  And there are variants in other nations, such as the Episcopal Church in the US, which have pulled back on the more gratuitous pretences of Mother England's Grand Dame.  Yet even an Archbishop of Canterbury with the undisputed brilliance of a Rowan Williams could do little more than shuffle the deck chairs on the stately old barge as it sprung leak after leak.

Bring on the women bishops by all means, and as soon as possible; it's got to be an improvement.  But to see good people, whether women or men, co-opted and compromised by an antiquated power structure seems to be by no means an unalloyed blessing.
Posted by Gavin R at 22:32