Fragmentation of a Sect

The Fragmentation of a Sect: Schism in the Worldwide Church of God 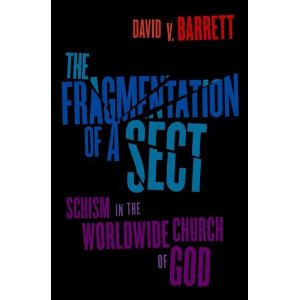 It's been years in the making, and finally it's on schedule for release.  The Fragmentation of a Sect by David V. Barrett began as a PhD dissertation; its subject, a minor Adventist sect then known as the Worldwide Church of God.

Barrett has been a relentless researcher, as I can personally attest, meeting not only many leaders of the movement - both those who stayed and those who left - but contacting others like myself who watched (and continue to watch) from a safe distance the rolling disaster play out in slow motion.  This is a work of scholarship, not polemic, the only sociological study of WCG offshoots to appear, so you can expect all concerned to get fair, impartial, but critical treatment.  Here's the description from Oxford University Press.


In the mid-1930s Herbert W. Armstrong, an unsuccessful American advertising executive, founded a millennialist Sabbatarian Christian sect with a heterodox theology. Over the next half century, despite a number of setbacks, scandals, criticisms, and attacks from former members and anti-cultists, Armstrong's organization, the Worldwide Church of God, grew to around 100,000 baptized members with a world circulation of over six million for its flagship monthly magazine Plain Truth. In January 1986, Armstrong died. His successor changed most of the church's distinctive doctrines, leading it towards an increasing convergence with mainstream Evangelical Christianity. This created a massive cognitive dissonance in ministers and members: should they accept or reject the authority of the church leadership which had abandoned the authority of the founder's teachings? Groups of ministers left the religion to form new churches, taking tens of thousands of members with them. These schismatic churches in turn faced continuing schism, resulting in over 400 offshoot churches within little more than a decade.

In this major study David V. Barrett tells the story of the Worldwide Church of God. He examines the processes involved in schism and the varying forms of legitimation of authority within both the original church and its range of offshoots, from hardline to comparatively liberal. His book extends the concepts of rational choice theory when applied to complex religious choices. He also offers a new typological model for categorizing how movements can change after their founder's death, and explores the usefulness of this model by applying it not only to the Worldwide Church of God but also to a wide variety of other religions.

It's an expensive book, but for those with an interest - personal or academic - in this unique movement, its rise and then dramatic collapse, this will be a milestone in coming to terms with - and perhaps understanding more fully - what has always seemed more soap opera than sober ecclesiastical history.

1. The Fragmentation of a Sect: an Introduction

PART ONE: THE STORY
2. Doctrines of the Worldwide Church of God

3 Origins and History of the Worldwide Church of God

4. Schism and scandals in the Seventies

6. Continuing Schism in the offshoots

PART TWO: THE ANALYSIS
7. Authority in the Churches of God

8. After the Founder Dies - How movements change

9. Who went Where and Why

10. Fragmentation in a Sect - a Conclusion


Look for a review to appear here early in the new year.
Posted by Gavin R at 22:53