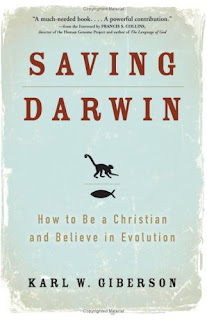 Giberson is a Christian who knows about evolution.  He understands how it works, and is smart enough (way smarter than me) to be able to make the case that the universe in general, and life on this planet in particular, has developed over long ages.

He gives both the Young Earth Creationists and the Intelligent Design theorists a thorough trouncing.

He fills in the history of this dumb debate, from Ellen G. White and George McCready Price through to Henry Morris and down to Phillip Johnson and Michael Behe.

Being a believer he also lands some punches on the so-called New Atheists, Daniel Dennett, Richards Dawkins and the gang.

And he's readable as well.

So here's my question.  How come, when you walk into a "Christian bookstore," you're unlikely to find a copy of Saving Darwin on the shelves?

No, what you'll almost certainly find is a lineup of Creationist drivel by an assortment of dilettantes.  Not John Haught, not Ron Numbers and not Karl Giberson.

How can these guys at Manna and Sonshine (or whatever your local Christian bookshop is called) possibly justify that?

How do they sleep at night knowing they're promoting utter nonsense?

Or maybe they don't know.  But then, if you wander into one of those establishments which carries a better range of theological and Biblical Studies texts, chances are you're still going to find unscientific rubbish sitting cheerfully on the shelves, burping and winking at you, opposite weighty tomes by N. T. Wright.

Come back Bernard Ramm, all is forgiven!

All right, enough moaning.  To finish on a positive note, I highly recommend Saving Darwin  (and if you're of the opinion that the gap theory solves all the problems, then you definitely should track down a copy and finally enter the twenty first century.)  Giberson is a living example of how you can still be a convinced Christian and have a scientific view on origins.  A real alternative to the stinking manna (Exodus 16:20) still on offer, despite having passed its use by date a very long time ago.
Posted by Gavin R at 22:31