Just when you think you've got it sussed

For example, that old chestnut that Jesus could never have been regarded as part of the godhead in the days of the 'early church'.  Why not?  Well, Jews were strict monotheists... and such flights of fancy were necessarily imported from Greek thought... right?

You hear this all the time.  The idea is that Jesus got gradually promoted over the years from a "low christology" to a stratospherically "high christology."  If we were to pare away, in Jesus Seminar fashion, all those dubious accretions we'd simply find a human prophet figure, or perhaps a cynic sage, who made no outrageous personal claims.

But wouldn't you know it, there's always someone ready to stir the pot, and Margaret Barker is more than happy to take up the ladle.  Barker is a former president of the Society for Old Testament Study, has taught theology at Cambridge, and written sixteen books (at last count).  In other words, this is no dilettante or kook.

Barker isn't taken in by the accepted narrative of Moses and monotheism;  Early Israelite religion was anything but.  Yahweh shared the first temple with his lady wife, Asherah, the Great Lady, until the heretics came along and doctored the national epic, declaring Yahweh to be a solitary deity.  The Deuteronomists, in other words, cooked the books.

So what?  Well, the old religion didn't die.  Cast out of the temple, it continued on the "old paths", a reality expressed by the exiles in Jeremiah 44:15-19. 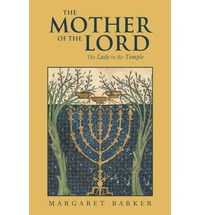 Again, so what?  Well, Judaism ultimately went the way of the Deuteronomic reformers, complete with fictive epics centred around Moses, but (according to the reconstruction) Christianity drew an inheritance from the older Abrahamic faith.  Here's where you can start to connect the dots with "Enochic Judaism" (Boccaccini) and Alan Segal's "Two Powers" binitarian monotheism.

So is Barker right?  Quite possibly.  If nothing else it makes a fascinating detective story that reaches back through the millennia to connect the first Jerusalem temple to Mrs O'Malley's rosary beads.  Fascinating stuff!

Barker has set out the terms for this discussion a number of times, most recently in The Mother of the Lord, the first volume in a series entitled "The Lady of the Temple." The hardback edition is, like most books of this kind, horrendously expensive.  Luckily the Kindle edition is more realistically priced.
Posted by Gavin R at 16:58