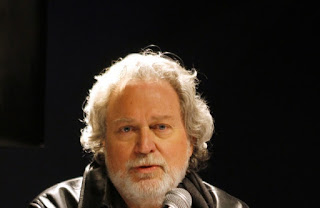 James Tabor makes some interesting comments in his latest book about "four Pauls."  To wit:
I'm glad James spells it out as clearly and unequivocally as he does.  Despite everything you might have assumed from a thousand sermons, there is a lot about the Apostle that we only think we know.

James goes on: there is almost universal agreement that a proper historical study of Paul should begin with the seven genuine letters, restricting one's analysis to what is most certainly coming from Paul's own hand.

And of those other sources: In modern parlance we call such writings forgeries, but a more polite academic term is pseudonymous, meaning "falsely named."

James' old mentor, Rod Meredith, would surely have a hernia reading this, so it's just as well he restricts his reading to in-house pabulum.

The book goes on to list those things we most assuredly know about Paul drawing on autobiographical details gleaned in those 'undisputed' writings.  It's certainly a safer procedure than most flap-jawed preachers use - with more eagerness than erudition.  But I wonder even then if we're getting anything like an accurate picture of the man behind the mask.

Imagine if you tried to gain an impression of some modern figure just based on the material they themselves provided.  Pope Benedict perhaps, or Mitt Romney; Margaret Thatcher or Fidel Castro; Benny Hinn or Muammar Gaddafi.

There's another more recent Apostle-type figure that both James and I know something about, him much more so than me; a man who wrote a great deal about himself both incidentally and deliberately, including a weighty autobiography.  Imagine, if you will, that the only information we had about Herbert W. Armstrong was what he himself supplied.  On the basis of that we'd all be holding hands with Bob Thiel and singing Dwight Armstrong hymns unto this very day.

So when Paul said that he advanced in Judaism beyond many of his contemporaries, being extremely zealous for his ancestral traditions, or that he had visionary experiences where he saw Jesus and was commissioned by him, I can't help but think of Herb bragging about his time at the Eugene public library acquiring the equivalent of a top-level degree, or getting his own unique end-time commission.  Just because someone makes an over-the-top claim doesn't mean its worth the paper it's written on.

You won't learn much about someone just by trawling through their press releases. 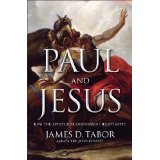 And the one thing we do know about Paul - it seeps out from all his writings - is that he had a towering ego, and a tendency to slap down anyone who got in his way, even when he was trying to demonstrate just what a reasonable, tolerant and thoroughly humble bloke he was!  Poor old Barnabas, John Mark, Apollos, James et al.  Paul, whatever else he might or might not be, is a passionate, no holds barred master rhetorician, so anyone wanting to make some sense of what he writes has got to factor in the deliberate exaggeration, self delusion and embellishment that go with that art.

I recommend Paul and Jesus, despite some mainly minor quibbles.  Whatever Dr. Tabor's agenda might be - and we all have one of those - he brings an considerable degree of scholarly nous to a popular audience.
Posted by Gavin R at 16:16