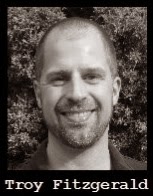 As time has gone on, a number of first person accounts have appeared written by well-placed former members of the religious 'empire' once ruled over by ad-man turned apostle, Herbert W. Armstrong.

Two fairly recent examples have been John Morgan's Flying Free and Ben Mitchell's The Last Great Day. Ben Mitchell is the son of an Australian minister while John Morgan's brother, Rex, continues to this very day (as far as I know) to manage what remains of the Worldwide Church of God in New Zealand.

Now there's a new autobiographical account by Troy Fitzgerald, son of a former US-based WCG minister. Like the others, this is a fascinating account for those of us who have 'done time' in the gulag. Fascinating in this case, not because it brings any new information to light about the church, but because it details a raw and brutally honest personal perspective. It's far from an academic treatment (for that you can't go past David Barrett's Fragmenation of a Sect), nor is there much pretense of objectivity. This is one man's story, looking back over his life, and dealing with religion, sexuality and business. But if you have problems with the thought of a gay man, formerly married with kids, baring his soul, then be warned in advance.

In general the book follows a threefold pattern; Troy's early years under the grip of a demanding religion, the growing awareness of his sexual identity as he came of age and the subsequent choices made, and finally the attempt to find a viable vocation in the economically turbulent period we currently live in. The three themes are, however, also intertwined throughout the book.

Coming of age is rarely easy in the best of circumstances, but particularly fraught for those with same sex attractions. Add to this the overwhelming pressure to conform as a pastor's kid in a rigid, monolithic and repressive church, and the conundrums simply multiply. Troy attempts to shift much of the blame on to the "sociopathic" staff at Ambassador College and their influence, but this seems a simplistic evasion of the responsibility those students had who willingly knuckled under in order to achieve ministerial rank.

Two ex-WCG websites have already recommended Cults and Closets, but I must admit to having some apprehension before downloading the Kindle edition. Overall I needn't have worried.

There isn't a book yet written that wouldn't benefit from the skills of a professional editor, and this one is definitely no exception. While the book rings true, there are simple proof reading errors, and Fitzgerald lapses into self indulgence on more than one occasion, notably when discussing his childhood relationship with his father, and falls for the temptation to preachiness, free advice and aphorisms, particularly in the last chapters.

The author seems genuinely intent on forgiving and forgetting the past, and yet he also seems unable to let go. In this he certainly wouldn't be alone, and hopefully writing this book has both helped him and will help others who have had (or know others who have had) a similar journey.