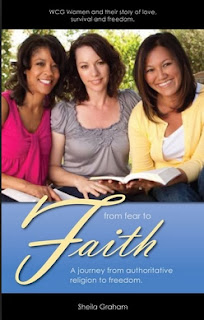 A woman's perspective was always a difficult thing to find in the old Worldwide Church of God.

Long years, and I suspect entire decades would fly past without a woman's name appearing as a byline in such church publications as The Plain Truth, The Good News or Tomorrow's World.

Even when the topic being addressed was women, it was invariably a member of the male gender who was commissioned to write the piece - and often prime examples of aging misogyny.

I once stumbled on an early, rare exception in what was probably a 1950s issue of The Good News. The writer was Isabel Hoeh, wife of evangelist Herman, and her contribution consisted of - and how predictable was this - recipes for the Days of Unleavened Bread.

But even in the the most repressive, role-stereotypical sect, there are usually remarkable and influential women to be found, even if only a handful, who wield great influence. Studies in Mormonism demonstrate the power of an undeclared matriarchy that, even in polygamous times, exerted unexpected influence over high status males.

What was notable in WCG however was how very few 'strong women' were apparent. Who would you nominate, apart from Loma Armstrong and Ramona Martin, the wives of Herbert W. Armstrong?

The announced purpose of Sheila Graham's recently released book, From Fear to Faith, is to provide a window on women's experiences in this unique sectarian movement.

Mrs. Graham is well qualified to do this as a longstanding, well-connected member, familiar with many of the leading lights in the WCG over many years. She has actively attempted to elicit stories and personal experiences from women in the church, both those who like her stayed through the transition to Grace Communion International, and others who moved on or out.

I've never met Sheila Graham, but have always admired her obvious tenacity. Once on the old Ambassador Watch site I suggested, somewhat tongue in cheek, that she'd have made an excellent replacement for Pastor General Joe Jr., if only he could be prised from his well-padded throne. Not that there was the faintest chance of that happening, but one can always dream. On reflection I think she would have been ideal for the task as a person capable of empathy and humility, qualities that are not exactly a strong suit among church leaders.

Whether Mrs. Graham has entirely succeeded in producing the book she intended, I'm not quite sure. Despite an energetic campaign to bring on board a variety of women's voices, far fewer seem to have stepped up to the mark than might have been hoped for. But this is a minor quibble. Why?

Well, this is the first book by a significant female figure in the movement's history. If I'm any judge, it's a carefully balanced account that strives to be both objective and respectful to all concerned. At times this means that it lacks a certain sharp edge, but I'm not complaining. A lack of cutting invective makes a refreshing change - and I've been known for a bit of unnecessarily cutting invective myself from time to time.

The book is all the stronger for Sheila Graham's own personal anecdotes of life as a single mother in a body that paid little attention to women in general, let alone those it deemed marginal. That Mrs. Graham has chosen to remain in GCI shouldn't be an issue for those of us who chose differently; what is important is that she has chosen, as we all have, and done so with integrity and honesty. The destination, as they say, is not as important as the journey.

From Fear to Faith is available only as an ebook. This ensures that it can be downloaded for next to nothing (0.99c).

And download it you probably should. Even though its target market is women (I mean, with that cover could it imply anything else!?) blokes could well profit from a sneaky read as well. Sheila Graham's perspective is a long overdue one that everyone with a WCG background, both women and men, should be willing to hear and to learn from.

From Fear to Faith (Kindle edition)