Rolf Harris: A Sense of Entitlement 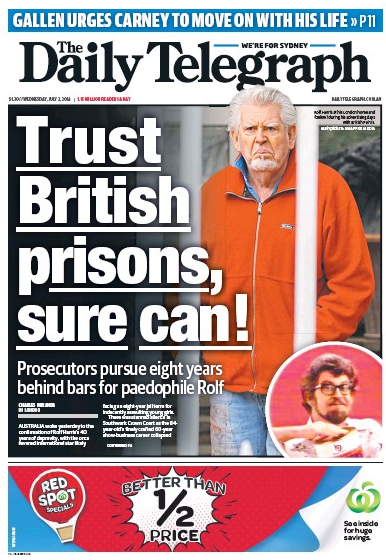 It probably hasn't made headlines to the same extent in North America, but in Britain and the Antipodes the conviction of Aussie entertainment icon Rolf Harris has been big news.

Rolf is a disarming character, full of charm and talent. An artist, a singer, family-friendly, a good bloke. For years he was the face of British Paints ads on television ("Trust British Paints? Sure can!"), and as kids many of my generation remember watching his popular TV show together with the folks each week.

Sadly, he wasn't so clever at tying his own kangaroo down, if you know what I mean. Allegations about his inappropriate behaviour have also surfaced here in the wake of the British trial. One such account comes from government MP Maggie Barry, who had to peel the scumbag off her prior to an interview on a local radio station when she was beginning her broadcasting career. Incredibly another comes from a woman who, as a nine-year old, was told to climb onto Harris' knee to receive a Xmas present at a charity function. Harris' reason for being in the country at the time? To raise funds to combat child abuse.

I suppose it's only to be expected that 'famous' people sometimes lose their sense of perspective and begin to believe their own publicity. For years we've known the damage that can be inflicted on child stars, and who couldn't have predicted with 99% certainty Justin Bieber's descent into stupidity. Humility, if it existed at the outset, turns into a sense of entitlement, and a complex justification created by the simple expedient of having to live with yourself afterwards.

The same mechanism operates, I suspect, with media-savvy preachers. Adoring crowds gather to collect the pearls of faux-wisdom that drop from their precious lips. They are men of God, and they climb up onto their own pedestals to the applause of the multitude. No wonder then that so many of them end up as Ted Haggard did. Power corrupts, but so does PR.

The moral? Never take a celebrity - even a celebrity preacher - at face value.
Posted by Gavin R at 16:19