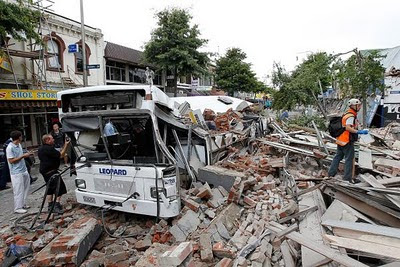 There's a sense of shock throughout New Zealand this afternoon at news of yet another huge quake that has hit the South Island city of Christchurch, just six months after the previous devastation. This time it appears there are multiple fatalities.

The human dimension is the part that grips one with live feed of traumatised people and locals phoning in to talk radio stations. Australians sometimes refer to this country as "the Shaky Isles," but truth to tell we tend to pay little attention to the earth's intermittent rumbling. Living in Wellington over a decade ago I got used to the occasional shake. Wellington was always high risk, but no one considered Christchurch in the same league.

Moments like these put our daily worries and preoccupations into perspective. A sobering day that will enter the history books of this nation.
Posted by Gavin R at 16:17