Rebellion in the Fatherland 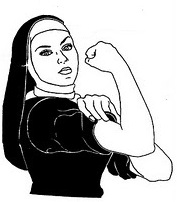 Even under the iron rule of Benedict XVI, the former Cardinal Ratzinger, the voices of reform continue to be heard in the Catholic church. Particularly so in the pontiff's homeland of Germany and other German speaking nations.


More than a third of the 400 Catholic theologians of Austria, Germany, and Switzerland signed a manifesto, published in the German daily Süddeutsche Zeitung, calling for radical changes in the Catholic Church. Calling for the ordination of women, the 144 signatories also called for popular election of bishops and an end to celibacy for priests. Back in 1989, 220 such theologians signed the so-called ‘Cologne Declaration’ that criticized Pope John Paul II. (Full story link.)

Mainline Protestantism charged off down its current dead-end path in the wake of the Second World War with the ascendancy of Karl Barth. Catholicism turned aside from its opportunity for change following the death of John XXIII and the gradual undermining of Vatican II. And yet...