An orchard in Edem

After mentioning Nicholas King's translation of the Septuagint earlier this week, I thought I'd share some gems from his LXX, all from the first three chapters of Genesis.

"Let there be a firmament in the middle of the waters." (1:6). King notes of 'firmament': this strange word comes to us from Latin, as a direct translation of the Greek word, which means something like 'firmness', 'strength', or 'solidity', referring to the solid dome of the sky, the bit between earth and heaven, or the solid bit that separates the lower waters from the upper waters. In Genesis, humankind literally lives under a solid dome.


"And God said, 'Let the waters bring forth creepy-crawlies...' " (1:20)
"And the heaven and the earth were completed, and all their array." (2:1). Says King of 'array', this is an attempt to capture one of the meanings of... kosmos, which in the New Testament often means 'world', but also 'beauty' and 'adornment' and 'ornament'... There is of course a connection with 'cosmetics'. 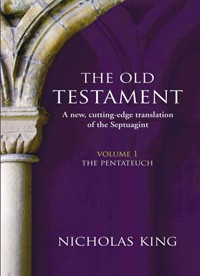 King's LXX is a delight, and with the additional notes included is much more fun to read than the worthy but stolid NETS version. Unfortunately it's not available through Amazon, I had to order my copy through the UK publisher, but it was worth the bother.
Posted by Gavin R at 18:02

Email ThisBlogThis!Share to TwitterShare to FacebookShare to Pinterest
Labels: LXX