The Month that Was 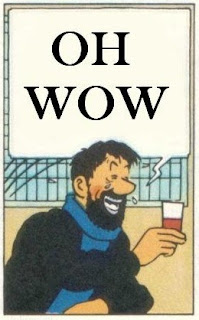 January grinds to a halt. It's been an interesting month on Otagosh. A new page design, a flood of hits on the 24th (at one stage topping 1000 an hour), and a record for the number posts appearing here - 49 in one month! I daresay that'll not happen again anytime soon.

The flood of hits I have to credit to "Captain Haddock" who placed the Enough to make you cry post on a link-sharing network where, after rising briefly to the top of the 'Christianity' category it was cross-posted on 'Atheism,' causing an avalanche of traffic for the best part of a day. It's probably safe to say that this is now the most read posting on this blog.

The January blog rankings have just been released. On the Biblioblog Top 50 it stands at 28 (up 1), while on Open Parachute, a New Zealand blog list, it's risen to number 13 (up from 25.)

In February I'm back in routine (i.e. at the chalk face), and there will be considerably less time to pound the keyboard - probably a mercy for all concerned. Guess I'll have to concentrate on quality rather than quantity...
Posted by Gavin R at 18:11