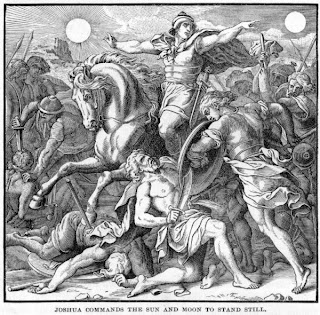 So how do we deal with the "texts of terror" in the Bible, or even just the terminally embarrassing ones?

Thom Stark begins (in chapter 9) by outlining three widely used reading strategies, each of which he judges to be problematic and inadequate.

1. Allegory: I first remember hearing the allegory strategy being trotted out from the pulpit of my highly fundamentalist church many years ago. The context was the liquidation of the people of Canaan by the tribes of Israel. Bob Morton fiddled with his glasses and explained in his faux American accent (he was a Kiwi) that the text was a difficult one and far too complex to explain fully in the sermon, but that we needed to think of it in terms of rooting out the spiritual "Canaanites, Hittites, Hivites, Perizzites, Girgashites, Amorites and Jebusites" in our own lives. Even then I thought it was a pretty lame approach.

Stark notes - correctly in my view - that this kind of allegorization is "an evasion of the truth; it is just one more way to doom ourselves to repeating history." These readings "do not directly confront the text; they simply discard the text's meaning." Equally important, "such readings are profoundly disrespectful to the actual victims of genocide, and to their survivors and descendants... In effect it makes us the equivalent of Holocaust deniers."

2. Canonical Readings: These, Stark explains "seek to discover the macro-narrative that underlies the minutiae. The important thing is the forest, not the trees." Anyone who has followed recent posts here knows my position on macro/meta/grand narrative claims already, but Stark puts it more lucidly: "the diverse voices of scripture are lost, and the problematic texts are swept under the rug... Problematic texts are immunized by appeal to some supposed grand narrative that recasts their significance." Again, "the reader does not seek to be faithful to the individual text; rather, the individual text is remade to be faithful to the reader's own conception of a broader canonical message."

3. Subversive Readings: This critique took me by surprise, as I assumed that this was what Stark was leading up to. But no. The example used is of the subversion of Roman imperial language (e.g. son of God, saviour, lord) by the early followers of Christ. This seems a brilliant strategy at first blush, but consider its down side. Stark writes: "If Jesus' language was a subversion of the official transcript, the reality is that his language has only been subject to counter-subversion by the ruling elites ever since." Who could deny that? The persecuted became the persecutors. The categories remain intact, lying in wait to pounce on future generations.

Well, what alternatives remain? That's the concern of the tenth and final chapter, and the concluding post in this series.
Posted by Gavin R at 22:37