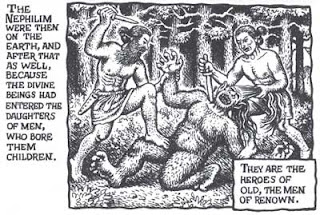 Deane Galbraith has a new blog, Remnants of Giants, which deals with the curious tales of giants in the Bible, including those Nephilim who were the offspring of the 'sons of God' and the ladies of the land. Assuming these 'sons of God' were angelic beings, how did they, um, accomplish it, considering that - in the New Testament - angels, being sexless creatures, "neither marry nor are given in marriage." That's a question touched on by Thom Stark in The Human Faces of God (p. 42-43, cf. 77-78). I don't think he's losing any sleep over it though; the various accounts don't seem to hang together particularly well.

Richard Elliot Friedman might disagree though. In a comment on Genesis 6 he connects the dots between the various giant stories scattered through the Tanakh.


We can read each of these stories without noticing that they are a connected account, building to a climactic scene, but obviously we miss something that way. Such widely distributed stories are there because the Bible is not a loose collection of stories. It is an intricate, elegant, exquisite, long work with continuity and coherence. (Friedman, Commentary on the Torah.)

Then again, coherence, like beauty, is in the eye of the beholder, and a pinch of Grand Narrative certainly always helps out with the continuity. The trick is in deciding which metanarrative to pick.

The primary focus of Remnants of Giants seems to be the influence of these tales "in contemporary culture," reflecting the concerns of that mysterious beast called reception history. Different! It promises to be an intriguing addition to the biblioblogosphere.
Posted by Gavin R at 22:42