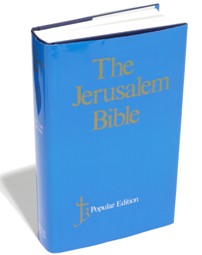 I've been thinning out the bookshelves. Weeding is long overdue, and now the academic study is over - at least for the next twelve months - there's no need to keep some of the less worthy tomes that did little more than clutter. Two big bags worth have gone down to Evermore Books, and I'll probably take more in next week.

The thing about second hand bookshops is that you tend to leave with more stuff than you take in. Resistance wasn't entirely futile this time around, but a tidy copy of the Jerusalem Bible winked at me on my way out, and in the moment of hesitation my self-control was lost.

The JB was released way back in 1966, and has since been replaced with the New Jerusalem Bible. Both are Catholic translations, and good ones too. Not that you're likely to find the NJB at the local Christian bookseller. Their shelves are usually crammed with an alphabet soup of evangelical versions: NIV, TNIV, ESV, Message, NKJB, KJV, NASB, NLT, Amplified, GNT, CEV, NCV... all of which come in variety of editions: for women, for men, for teens, children, left-handed people...

Okay, so I made up the one about left handers, but it's probably being released later in the year. Look hard enough and if you're lucky you might find a NRSV hidden on a bottom shelf. As for other non-evangelical translations, tough luck! At least that seems to be the case at most of the Manna bookstores.

Alternatives? In my highly biased opinion the NRSV is the best overall, and there are lots of editions to choose from (I use the HarperCollins Study Bible and the Fortress Press Lutheran Study Bible), though it's a bit traditional for some tastes. The Revised English Bible (an update of the 1970 New English Bible) is a personal favorite, but not always easy to find. The JPS Tanakh should sit on every preacher's bookshelf as a reminder that Christians share the bulk of their scriptures with the people whose intellectual property they appropriated. The progressive Catholic Inclusive Bible is excellent to irritate fundamentalists with, then there are more Catholic options worth considering; the New American Bible (not the same as the NASB) and the Christian Community Bible.

And if you haven't already, race in while you can to download a free PDF copy of the entire Christian Community Bible, including those extra books missing from standard Protestant versions. If nothing else, it has a fresh feeling for those of us raised in the RSV generation.
Posted by Gavin R at 15:02