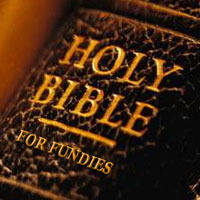 Today, in the public mind at least, fundamentalists and their pastel-shaded evangelical brethren, rule the roost. Talk about Christianity to most folk under forty and they think, not of Presbyterians, Christening ceremonies and 'Guide Me O Thou Great Jehovah,' but rock-style praise choruses, arm-waving, and motivational pastors in smart casual duds. When they think of the Bible they think of a collection of proof texts and motivational anecdotes designed to elicit an audible 'amen' from the folk in the 'auditorium.' Mention JEPD or Q and everyone looks confused, not only the outside observers (and understandably so), but more particularly those seated with Holman Christian Study Bibles on their laps. Indeed, there's a whiff of sulphur on the breeze when you even hint at a critical approach to the scriptures.

But was it thus always so?


The problem is not just that honest, well-meaning Christians believe Evangelical authorities when the claim is made that this kind of fundamentalism is the only proper way to be a Christian; non-Christians tend to believe them too. But the fact is that fundamentalism as it exists in the Western world today is a relatively new phenomenon and there are many ways to be Christian, some of them much more ancient and developed. Because of the volume at which leading Evangelicals tend to speak, however, this fact is well disguised from the view of many.

Thom Stark writing in the preface to The Human Faces of God.

Enough of the preliminaries. Next time we'll engage with the first chapter.
Posted by Gavin R at 16:28