Jeremiah was no bullfrog 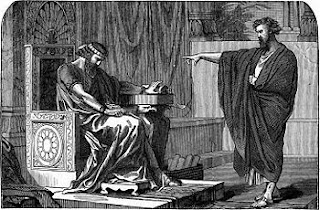 Tim Bulkeley has had some interesting things to say about Jeremiah recently, and specifically those sections described as the laments. In his latest post he notes:


... whatever else the book... of Jeremiah is about it is concerned with the tempestuous and troubled relationship of God and prophet.

Coincidentally I've been rereading Jeremiah over the last couple of weeks, and a pleasant diversion it is not. Jeremiah strikes me - and this is far from an original thought - as first and foremost a political agitator, and the God-talk, which serves as a framework for his agenda, serves those ends. The book is written against a time of horrific political developments, and the prophet - a partisan for the Babylonian superpower ("my servant Nebuchadnezzar") - attempts to make sense of it all through the time-honoured method of blaming the victim (the people of Judah) while stewing in his own self pity. He would have made a great conservative radio talk-back host! Here's a brief outline of just some of the textual evidence (bearing in mind that all we have is Jeremiah's side of the story.)

Jeremiah is accused of being a 'Tokyo Rose' Babylonian collaborator. Jer. 38:4-6
Jeremiah is arrested as a deserter and imprisoned as a political prisoner. Jer. 37:11-21
Jeremiah is rewarded by the invading Babylonians for his helpful role. Jer. 39:11-14, Jer. 40:2-6
Jeremiah uses Glenn Beck-style political invective against the enemy (pharaoh.) Jer. 46:17
And, not entirely unrelated:
Jeremiah describes his own encounter with Yahweh in terms of a rape. Jer. 20:7 (see Tim's comments on this verse, and my earlier comments.)

Jeremiah's God is a bloodthirsty and pitiless monster (Jer. 48:10). Even some of the ameliorating texts included in the Hebrew Bible (e.g. Jer. 49:6) are probably later editorial additions, and are absent from the LXX. Issues of justice and expressions of compassion are remarkably absent. Yahweh and Yahweh's prophet seem to be, unsurprisingly, on the same page on matters like these.

Yes, there are a few nice passages and a handful of usable but decontextualised proof texts. But after trudging through all fifty-two chapters, with the blood and bile up to the tops of my gumboots, I have to wonder whether Marcion's instincts weren't spot on after all.

(Thom Stark suggests a way through such dilemmas, but that's another post.)
Posted by Gavin R at 16:18