Tithing - from Purse to Persia 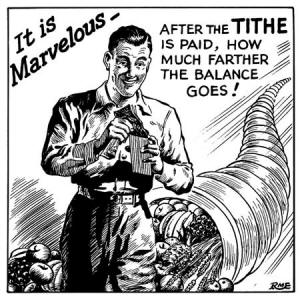 How all this translates across to cheques, automatic bank deductions and non-levitical preachers with their hands stretched out to garner the Lord's increase is a bit of a mystery.

Could somebody please explain to me why Jews today - in the absence of a temple and priesthood - don't tithe?  Oh, hang on, no temple or priesthood... yeah, I get it.

Then, there's also the uncomfortable fact that, even when the temple was standing, Jews in the diaspora didn't tithe.  There was no point.  How were they supposed to get all that perishable produce back to Jerusalem?

Somehow this simple logic seems to have escaped the prosperity preachers who happily get prosperous by laying a non-biblical tithing burden on their credulous flocks.  They, naturally, don't want ten percent of the potatoes in your back yard garden.  They want currency!

I have Ernest L. Martin to thank for first exploding the tithing myth for me.  Martin was a former professor of theology at Ambassador College in Pasadena.  He walked from there in the 1970s, setting up his own ministry and publishing, among other things, an influential rebuttal of tithing as a Christian practice.  A version of his booklet is still available online.

The problem was that Martin was still at heart an apologist with a pre-critical understanding of the Bible.  That was no bad thing when communicating with like-minded folk, like myself, who shared that approach.  But the years have rolled by, and hopefully those of us who were alive and kicking back then have all grown and matured a bit.  The old biblicist assumptions no longer hold sway over many of us.  So, what about the tithing question once we've stripped away the fundamentalist mind set?

All of which is a lead-in to a brilliant posting by Scott Bailey on his Scotteriology blog.  It sets the scene in the province of Yehud in the days Malachi, and of Persian imperial policy.  Here is, dare one say it, "the plain truth" (or part of it) about tithing.
Posted by Gavin R at 13:51