[This is the final in a series on David Barrett's book Fragmentation of a Sect: Schism in the Worldwide Church of God.]

Chapter 9 is in many ways the most fascinating chapter of Fragmentation. Largely drawn from the results of a questionnaire designed by the author and completed by more than 300 members of the various offshoot bodies.

In the questionnaire Barrett asked, among other things, what doctrinal issue first raised a red flag about the direction the church (WCG) was taking. A further question asked what was the 'final straw' that led to separation.

The largest number identified the move toward trinitarianism as the first issue to cause doubts. The second factor was the cutting loose from Sabbath observance, followed by a more general worry about the church's position on the Law issue.

These same three factors appear again as the final straw, but with a different weighting. First, the Sabbath, 2nd the Law, 3rd the trinity. An outright majority agreed with the statement that "individual church members should be able to disagree with their church leaders and local minister and still say in the church."

Turning the focus further on to church governance, respondents strongly supported the idea that leaders were unfit for office if they displayed pride, arrogance and authoritarianism. Personal morality issues scraped in at number 5 on the list. It would be interesting to know if these results would have also held true for those who departed in the 1970s when the Armstrongs' moral failings began to surface in the public arena. 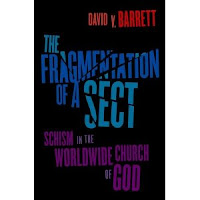 As for decisions on which of the various alternate schismatic groups were chosen as bolt holes, leadership and doctrine issues had priority, and personal ties of friendship and family ranked much lower. The result is a diaspora that shows little regard for relationship solidarity. I suspect this is because breaking free from a manipulative, controlling religious group involves intensely personal decisions.

Chapter 10 provides a very brief reprise (three pages) of the book's structure, followed by a series of appendices. Of these, number four was of particular interest to this reviewer. Survey respondents were asked to identify the specific group they affiliated with after leaving WCG, and then the group they were currently involved with. Not surprisingly, many had moved on in relatively short order. 114 respondents initially went with the United Church of God, for example, but only 76 remained as of late 2008. Given subsequent events, including the COGWA bloodletting, this figure would now be perhaps halved. Of the 38 who went out after Roderick Meredith (i.e. Global or Living), less than 50% remained in 2008.

There is much in David Barrett's book to ponder for those who have journeyed on this path, and he provides a clear lens, devoid of the usual apologetic blather and self-justification that have dominated discourse on the WCG. If you want to follow a Tkach-friendly party line there are books by Joe Jr. and Mike Feazell (it is fair to say that the present leaders of GCI will have little to celebrate in this publication). If you want a hardline schismatic perspective, there is Stephen Flurry's book. This however is a book members and former members of 'the Worldwide family' will want to read for themselves simply because it does step away from the sound and fury of the battling factions and self-serving propaganda. It will also serve as a case study in the sociology of religious movements for years to come, and perhaps as something as a 'fly in the ointment' for some of the received wisdom in this field.